Cork claimed the Bord Gáis Energy Munster U20HC title and dethroned provincial and All-Ireland champions Tipperary in the process, as they held out for a 1-16 to 1-14 victory at Páirc Uí Chaoimh.

The Rebels had been beaten by Tipp in the last U21 All-Ireland final in 2018 and the first U20 decider in 2019 but they will have a chance to atone for those losses in the All-Ireland final against Dublin or Galway on 9/10 January.

While the final scoreline had just two points between the teams, Pat Ryan's side led by six deep in injury time after an emphatic surge in the closing stages. However, they were kept on their toes as a point by Tipperary’s Andrew Ormond was followed by a goal from the same player, but the visitors could not conjure a game-winning second goal.

Overall, the outcome was fair as Cork looked likelier winners ever since they overcame their poor start to move into a 0-04 to 0-02 lead, playing some lovely hurling and benefiting from the sharp-shooting of Shane Barrett and Colin O’Brien in attack.

They were 0-08 to 0-04 in front when those players linked to good effect, but Tipp came back well, with their captain Eoghan Connolly landing some big frees from distance while Devon Ryan made his presence felt in attack.

It was 0-08 each after 25 minutes but Cork responded through Alan Connolly and Barrett, with Ryan’s fifth point of the half for Tipp ensuring a 0-10 to 0-09 half-time scoreline in Cork’s favour. 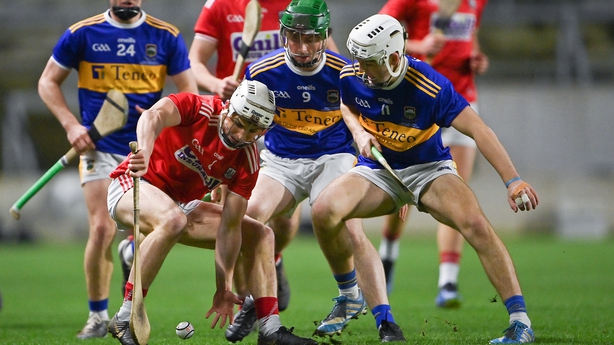 The opening stages of the second half saw Cork try to pull clear only for Tipp to come back each time, while the Premier County twice went close to goals – first, a good move gave Kevin Maher an avenue but he was penalised for over-carrying and then Andrew Ormond was denied by a good Eoin Davis save.

After Cork’s Brian Roche made it 0-13 to 0-11 with a fine point on 45, Ormond replied for Tipp just before the water break and he levelled when the action resumed, but from there Cork found an extra gear.

They had breathing space again thanks to a superb Barrett point and a free from Connery before the game’s first goal.

Three Cork subs were central as Seán Twomey’s ball across was picked up by Brian O’Sullivan and, though Aaron Browne saved from him, Jack Cahalane pulled the loose ball to the net.

Cahalane’s free made it a six-point game, but Ormond ensured that Tipp stayed alive as he landed his third point and then a goal at the death. However, Cork were not to be denied.