In a year of novel occurrences, an All-Ireland final pairing of Waterford and Limerick is set to take place for the very first time.

But how did we get here?

The Déise are heading into their second final in four years, but it would have been a brave punter to predict that back in October.

Their 2018 and 2019 campaigns were ones to forget, with eight games yielding seven defeats and a draw. Discussions had moved towards justifying the south-eastern county's place in the Munster SHC Championship.

In a June 2019 debate around Carlow's relegation from Leinster on The Sunday Game, Antrim hurler Neil McManus declared, "if I'm in Carlow today I'm absolutely livid that I'm being relegated and yet Waterford haven't won a game; they were well-beaten in a lot of their games. There's no trapdoor, there's no negative for them."

All of that is for another day, but it gives an indication of just how far Liam Cahill has brought this group of players in 2020.

"Liam Cahill's teams generally are known for their work ethic (and) if the Rebels aren’t ready for that, they will be in trouble," warned Donál Óg Cusack on RTÉ's Morning Ireland in the week before the game.

But it wasn't a case of forewarned being forearmed for Cork, as Waterford brought an intensity to their play that had only been seen in flashes over 2018 and 2019.

Despite playing into the wind in the first half, the Déise led by three at the break. And when Callum Lyons rattled the net on 40 minutes, the lead was eight and Cahill's side were on their way.

Despite a late rally from Cork, Waterford were into a first provincial decider since 2016.

Waterford headed for Semple Stadium looking for a first Munster title in a decade against a side that were many people's favourites for the All-Ireland before the start of the season.

But Cahill's side put it up to the Treaty men and went in just two points behind at the break.

Aided by an in-form Stephen Bennett, they were level inside the last 20 minutes, but that's when the game got away from them and Limerick were able to find another gear.

It sent them through the longer route of quarter-final.

It was another Munster county for Waterford in the last-six as Clare, and Tony Kelly, stood in their way at Páirc Uí Chaoimh.

A frenetic opening half saw Waterford ahead by three at the break after Dessie Hutchinson scored two goals and set up another one for Jack Fagan.

They pushed the lead out to five by the time of the second-half water break, and they were able to see out the game impressively, particularly considering the proximity to the Munster final loss.

That set up a date with neighbours Kilkenny.

For the first time since 1963, Waterford came into the game having won the last championship meeting of the pair.

But the first-half showing didn't suggest that they were about to do back-to-back wins over the Cats for the first time ever. Goals from Martin Keoghan and TJ Reid saw Brian Cody's side take a nine-point lead into the break.

But once again there was a bounce in Waterford in the third quarter, with a Stephen Bennett goal setting them on their way.

They drew level in the 50th minute and a Darragh Lyons goal 10 minutes later helped them to win by four.

Waterford are arguably now in bonus territory to a certain extent, but finals don't come around too often for the Suirsiders - Saturday will mark just their eighth appearance in the showpiece game.

They got to see John Kiely's men up close and, although it might not have been to the forefront of their minds at the time, there were certainly lessons to be learned.

Every man and woman in blue and white watching Sunday's game will hope the team has taken them on board and can produce a performance to end the 61 year wait.

While Waterford are the surprise package, Limerick have been the team fancied by many to claim Liam MacCarthy since the start of the year.

Last year for them ended in disappointment when they were beaten by Kilkenny, with Darragh O'Donovan’s late sideline cut in that All-Ireland semi-final being called as a wide, when it should have been a 65, only adding to their frustration.

But their form in the championship has been good, with the sense that there's still more in them. Indeed Henry Shefflin said that they were lacking goals after they booked their place in the final.

Limerick are into the final but @shefflinhenry does not believe they are flowing and the goals are not coming #rtegaa https://t.co/11LVxKXfNT pic.twitter.com/021y0tuicB

This first day was all about Limerick's second-half showing.

The sides went it level at the break, and there was just a point between them after 46 minutes, but the Treaty men outscored their opponents from there by 0-15 to 0-06.

The game also marked the final of the Allianz League as John Kiely's men defended the first of the two titles they had won in 2019.

11 different scorers hitting 26 points from play set them up nicely for a crack at All-Ireland champions Tipperary in the semi-final.

The sides' previous championship meeting was in last year's Munster final when Limerick had won well.

And this year's encounter between the counties followed a similar trajectory as the Shannonsiders never fell behind over the course of the game.

When Tipp threatened in the first-half through a Jake Morris goal, which cut the gap to the bare minimum, Aaron Gillane found the net at the other end from the very next attack.

The lead was nine at half-time and, despite a mini-revival from the Premier County just before the hour mark, it would remain the difference at the end.

Gillane and David Dempsey found the net for further Limerick goals and it set them up a provincial decider against the Déise.

Despite the backing for Limerick coming into the campaign, and their impressive showing in their first two games, they were still looking to do back-to-back Munster titles for the first time in nearly 40 years (1981).

But any sense of history weighing on their shoulders didn't come to pass as John Kiely's men finished the game strongly, hitting seven of the last 10 scores.

On top of that they missed some other chances but it meant they had retained both of the cups they won in 2019.

After three weeks out on the spin, the victory gave Limerick a weekend off ahead of their All-Ireland semi-final against Galway. 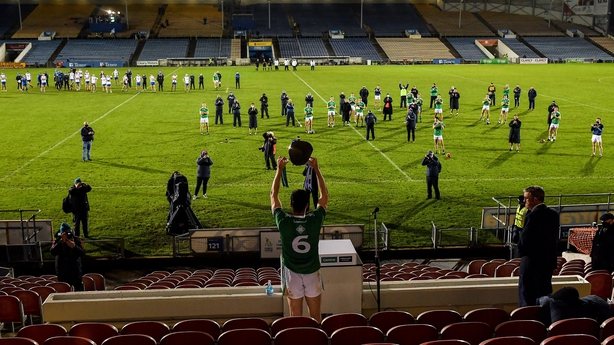 This really was the battle of the sides claiming to be the best in the country over the last three or four years (Tipperary would have something to say about that).

It was a true test of Limerick's character as Galway led for large swathes of opening 35 minutes but still found themselves going in two down at the break.

After an unfortunate injury for Joe Canning which required him to be taken off the field by stretcher, the Tribesmen were able to draw level once more.

But in the nine minutes of added time, when the game was truly in the melting pot, Limerick found the answer and were able to hold out for a three-point victory and a place in a second final in three years.

Can this Limerick team answer the critics and confirm their status as the unquestioned best team of the current era?