The LGFA has outlined the developments that led to today's All-Ireland football semi-final between Cork and Galway to be moved for the second time due to a frozen pitch at Parnell Park.

The game was originally set to take place at the LIT Gaelic Grounds, but the Limerick hurlers needed the stadium for a pre-All-Ireland training session. As such, it was moved up to Donnycarney.

However the LGFA confirmed on Sunday that "icy conditions" meant the home stadium of Dublin GAA was no longer suitable, so the match was moved to Croke Park.

Cork set up a final showdown against champions Dublin with a 2-17 to 0-13 victory. 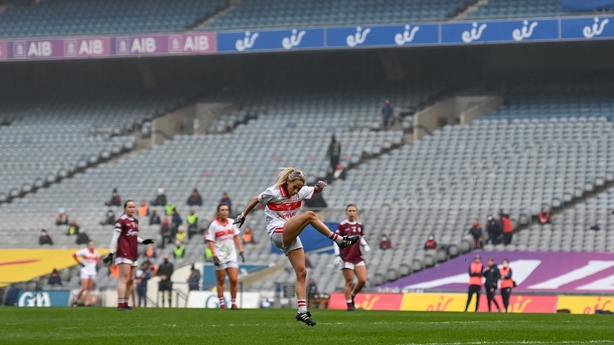 In a statement released on Sunday afternoon, the LGFA said: "A morning pitch inspection deemed the original venue, Parnell Park, unplayable, due to severe frost.

"The decision to move the game from Parnell Park, therefore, was made in the interests of player safety.

"A request to accommodate the fixture at Croke Park was made to the GAA at 10.20am, and the LGFA was informed at 11am that the game could be played there.

"The Galway team, in Kinnegad at the time, received first notification at 10.53am that there was an issue with Parnell Park.

"We were acutely aware that Galway were travelling at the time, and they were informed that the LGFA had contacted Croke Park in relation to a potential venue and time change.

"Galway were informed, once confirmation was forthcoming from Croke Park, at 11am, that they should proceed to the venue, for a 1pm throw-in.

"The 1pm throw-in time was scheduled due to the fact that a result on the day was required, with extra-time and 30m kicks a possibility.

"Cork, who were based in Dublin overnight, were also contacted at this stage and made aware of the new arrangements.

"While recognising that a change of venue and time was not ideal, the alternative was to postpone the game. The health and safety of our players was to the forefront in the LGFA's decision to proceed at Croke Park.

"We wish to thank the GAA most sincerely for making Croke Park available to the LGFA at short notice.

"The game got underway at 1.10pm, to afford both teams an extra ten minutes to prepare.

"The LGFA regrets that the game was not available to viewers, despite concerted efforts to secure live coverage.

"We congratulate Cork on qualifying for the final against Dublin at Croke Park on 20 December, and offer our commiserations to Galway on the day."