Limerick are sweating on the fitness of sharpshooter Aaron Gillane ahead of the All-Ireland hurling final against Waterford on Sunday week.

The full-forward and free-taker was substituted late on in the semi-final victory over Galway after a heavy collision with Galway centre-back Gearóid McInerney.

Gillane celebrated on the Croke Park pitch with his team-mates at the final whistle last Sunday but subsequently complained of back pain in the dressing-room, and was taken to the Mater hospital in Dublin, where he spent the night.

Selector Donal O'Grady told RTÉ Sport today that Gillane was rated as "50-50" to start next week, and would be assessed again by the county’s medical staff ahead of training tomorrow.

O’Grady said that Gillane had suffered heavy bruising and had had some difficulty breathing after the game but that he had been released from the Mater hospital on Monday and attended a team meeting midweek.

"They kept him overnight as a precaution," said O'Grady. "They were slightly concerned. But he was released the following day which was great.

"He came in to see us on Tuesday night but obviously didn't train. So hopefully we’ll know more towards the weekend.

"We are hoping to possibly get him re-assessed on Friday night, to see how he is. At the moment, 50-50 is my understanding." 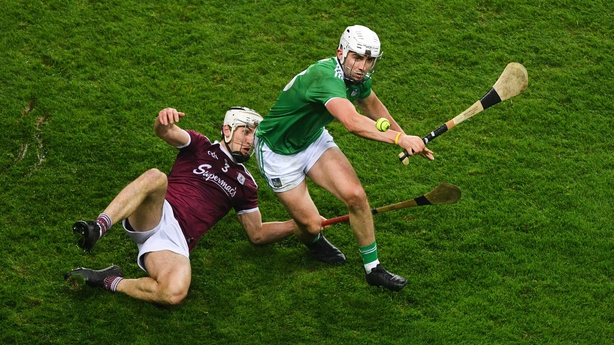 O'Grady said he would expect Gillane to play if at all possible and revealed the Patrickswell man was also playing with a strapped finger, having damaged ligaments earlier in the campaign, but had shrugged off a hamstring injury from earlier in the year.

"He possibly should have taken a couple of weeks to leave that recover," said O'Grady of the hand injury.

"But he really wanted to get his fitness and get his hurling back as quickly as possible. And he basically just played through the pain barrier.

"He is playing with that slight finger strapped but no tougher man than himself.

"He does take a lot of punishment inside on the edge of the square. He's well able to mind himself though which is great."

Na Piarsaigh forward David Dempsey is in line for a return to training after missing the win over Galway with a hamstring injury.