A passionate display laced with heart and courage worked perfectly for Mickey Graham's heroes as they hunted down the holders and struck for the killer scores.

And they were fully deserving of a four points success that denied Declan Bonner’s side a third successive provincial crown.

And all that just weeks after the crushing blow of relegation to Division Three of the National Football League.

The Breffni men showed no fear, confident from the outset that this could be their day.

And they were not derailed by the two black cards that required them to play for 20 minutes with 14 men.

Substitute Conor Madden nailed 1-02 for the newly crowned champions, his goal coming deep into stoppage time as an affirming statement of this marvellous achievement.

Comeback winners over Monaghan and Down, Cavan were now ready to go blow for blow, toe to toe with a Donegal side that had been touted as the greatest threat to Dublin’s dominance.

Now it’s Ulster’s newly crowned champions who will face off with the All-Ireland champions on Sunday week.

Cavan displayed a spirit of freedom and fearlessness as they took the game to the defending champions from the off, racing into a 0-4 to 0-1 lead, with scores from James Smith, Oisin Kiernan, Gerard Smith and a superb effort from wing back Ciaran Brady. 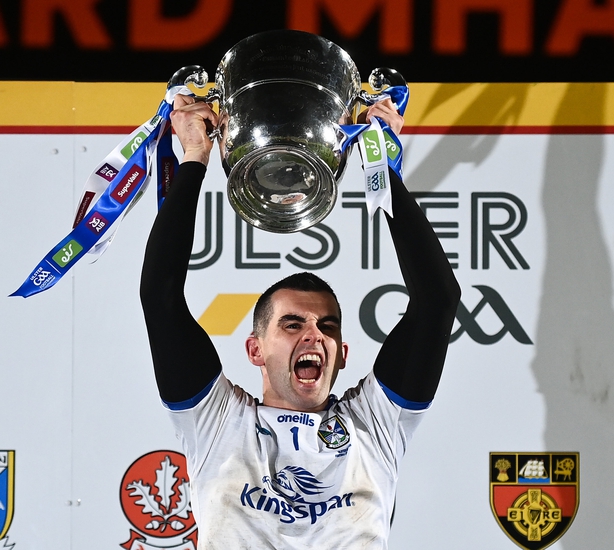 They were still three ahead when they lost Killian Brady to a black card in the 11th minute, and during his absence, Donegal made strides.

With Peadar Mogan heavily involved with his clever use of space and timing, they reeled off five points on the spin, two of them from Paddy McBrearty off his trademark looped runs.

Ryan McHugh gave them the lead for the first time, but Cavan dug in, with Killian Clarke, Ciaran Brady and Gearoid McKiernan working hard, and Thomas Galligan operating as an effective target man.

Jason McLoughlin chipped in with a point as they stayed on the coat-tails of the Anglo-Celt Cup holders, but they needed some stubborn defending from Padraig Faulkner and Chris Conroy, who blocked a goal-bound shot from Eohgan Ban Gallagher.

Luke Fortune’s fist-pump at the half-time whistle spoke volumes of Cavan’s delight at reaching that stage just two points adrift, 0-09 to 0-07 after playing into the wind.

They clawed their way back with scores from Galligan, James Smith and Madden, but the defending champions kept their noses in front with a couple of McBrearty frees.

The magic moment for Cavan. The All-Ireland semi-finalists are the same as they were one hundred years ago in 1920. When hope and history rhyme... #RTEgaa pic.twitter.com/XqtXt1uvuf

Another black card, this time shown to Madden, threatened to push the Cavan men off course, but they never took a backward step, and out-scored their opponents by two points to one while a man short, Martin Reilly and Gearoid McKiernan both on target.

Donegal created two goal chances during this crucial spell, but Raymond Galligan would not be beaten, denying Mogan and Jamie Brennan.

Now the Breffni braves had the belief, if they ever lacked it, that this was to be their day.

Oisin Kiernan landed a huge point to nudge them in front with five minutes to play, and Marty Reilly had a chance to double the lead, but he opted to go for goal, and brought the save from Shaun Patton.

Gerard Smith and Ciaran Brady were ravenous in their pursuit of broken ball as Donegal were denied the opportunity to create, and the crowning glory came in stoppage time when Conroy smashed home a goal after Patton had parried McKiernan’s booming delivery.