Cavan came from ten points behind to score a remarkable comeback victory over Down and set up an Ulster SFC final meeting with champions Donegal.

The Breffni men simply refused to lie down at the Athletic Grounds, taking the second half by storm as they stunned the pre-match favourites with an awesome display of guts, positivity and courage.

Relegation to Division 3 of the Allianz League has done nothing to diminish the self-belief among Mickey Graham's players, who expended every last ounce of energy in digging out this terrific result.

And having taken out Monaghan, Antrim and Down, they won’t complain about going into the provincial decider as rank underdogs.

Jerome Johnston slipped a pass for Ceilium Doherty to smash home a third minute goal, and already the movement of the Mourne men was causing immense difficulties in the Breffni rearguard. 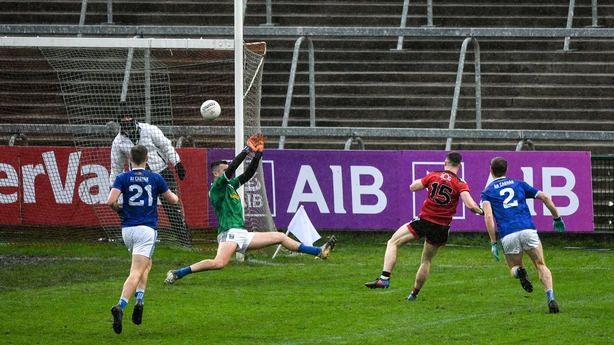 A heavy sod on a grey afternoon may have been considered favourable to Mickey Graham’s side, but the pace of the men in red and black shone, particularly through Johnston, Caolan Mooney and Daniel Guinness.

Cavan did have their opportunities, but wasteful finishing stifled their efforts, and while they pushed up on Rory Burns’ kick-outs, Down came out on top in the battle for broken possession around the middle.

By the 12th minute, Paddy Tally’s wind-assisted side had opened up a seven points lead 1-4 to 0-0, with Johnston and Doherty nailing all their scores, and it wasn’t until the 13th minute that Stephen Smith got Cavan off the mark from a free.

Jonny Flynn restricted the influence of Gearoid McKiernan, and the Breffni system suffered as a result, shipping another blow as the influential Marty Reilly was sent to the sin bin on 25 minutes.

The Down men were growing in confidence, even beginning to display glimpses of the famous Mourne swagger, as they stretched the lead with a couple of Paul Devlin placed balls.

And they created further goal chances late in the half, Mooney racing through the middle to bring a fine save from Raymond Galligan, and Johnston denied by a superb Padraig Faulkner block.

Faulkner and McKiernan pulled back scores late in a difficult first half, but Down were looking comfortable at 1-09 to 0-04 on the turnaround.

But Cavan went man to man and threw everything into attack on the restart, their direct, route one approach causing havoc at the back, and frailties in the Down defence were exposed.

When they failed to clear a Chris Conroy free, Kevin McKernan was penalised for touching the ball on the ground it the small square, and Marty Reilly rifled home the penalty.

The introduction of Conor Madden added a much-needed spark to the Breffni attack, while Thomas Galligan moved to full forward to create havoc, and Reilly and McKiernan began to impose themselves on the contest. Padraig Faulker was an immense figure as he pushed up to add power to the central area.

Madden fired over three points, including a wonderful effort from close to the sideline.

And it was Galligan who brought the sides level on the hour from a mark.

Ciaran Brady was another colossus, winning the free from which McKeriann gave them the led for the first time with five minutes left on the clock

Raymond Galligan’s excellent kick-outs kept his side on the men in blue on the attack, and they stretched the advantage through Thomas Galligan and Killian Clarke.

Down made it a tense finish with late scores from O’Hare and Sheelin Johnston, but this was to be Cavan’s day.