Supersub Richie Hogan hit 1-02 off the bench to inspire Kilkenny to their 72nd Leinster title and first in four years as they got the better of Galway at a blustery Croke Park.

Having led by a point at half-time, the Tribesmen had looked to be easing to victory with a five-point lead and a quarter of an hour to play, but two goals in a minute propelled Kilkenny into a shock lead.

Galway kept their heads and when Joe Canning, who scored 14 points, and substitute David Burke inched them back in front, they looked to have reasserted themselves.

Kilkenny came again however, Hogan zipping another goal chance just over the bar and Conor Browne levelling it up with two minutes left.

Martin Keoghan and Hogan both struck from play to edge the Cats ahead and a Canning free that hit the post was the best chance Galway managed in four minutes of injury-time.

Kilkenny march on to the semi-finals after their first championship win over their rivals in five attempts - a stunned Galway side must now regroup to play Clare or Tipperary in an All-Ireland quarter-final next weekend.

Just when the game looked to be getting away from them, Richie Hogan drags Kilkenny back into with a wonderfully taken goal. Kilkenny 1-15 Galway 0-20. Watch highlights on The Sunday Game at 9.30pm on @rte2 #rtegaa #thesundaygame pic.twitter.com/c6yPTyoICx

A strong breeze whistled through the eerily empty Croke Park from before the throw-in - Kilkenny had it in their favour in the opening half but that wasn't apparent as Galway dominated.

Galway were going more direct and disrupting Kilkenny’s attempts to work it through the lines, which often ended in the hands of sweeper Padraic Mannion.

The bigger, more aggressive Galway side won most of the ball and scored most of the points of the play but also did most of the fouling, allowing Kilkenny to keep in touch through frees.

Johnny Coen scored three points from play in the opening period, only one less than Kilkenny managed combined, and Conor Whelan bagged two but Galway repeatedly fouled in a bid to deny their opponents goal chances and Reid fired over eight frees as a result.

Canning was a man possessed, dispatching five frees, sending over a point when Galway turned over a short puckout, and picking out Joseph Cooney from a sideline for the point of the half, the wing-back catching superbly to fire it over. Cathal Mannion’s sideline dummy and lofted finish was a close second

That put Galway 0-9 to 0-07 up after 22 minutes and they could have been further ahead when Nialkl Burke caught Canning’s long delivery over the head of Huw Lawlor – the Kilkenny full-back held onto his hurler like a relay racer who had forgotten to release the baton and Galway had to settle for a free. Lawlor wasn’t even shown a yellow, which will add fuel to the hurling black card debate

Kilkenny’s forward division had been kept very quiet but Eoin Cody sparked to life, scoring after a fine fetch and turn and setting up Keoghan to tap over.

Mannion should have taken his point when trying to pick out Concannon for a goal chance that Tommy Walsh did well to block and after John Donnelly and Canning exchanged scores Galway led by the minimum at half-time – 0-13 to 0-12.

It's nip and tick between Kilkenny and Galway but this point from Joe Canning is the difference between the two sides at the break. Kilkenny 0-12 Galway 0-13. Watch highlights on The Sunday Game at 9.30pm on @rte2 #rtegaa #thesundaygame pic.twitter.com/CU5ekYHvUa

Kilkenny went more direct and upped their intensity after the break and were quickly back on level terms but they started to leak frees themselves and Canning took full advantage.

The Galway man surprisingly went for goal from a 20m free that Tommy Walsh stopped on the line but cut over a sideline ball in atonement and added a 65 after Eoin Murphy turned Galway sub Jason Flynn’s shot into the side-netting.

Hogan had been introduced in the 45th minute but the sight of Walter Walsh and Colin Fennelly being hauled off scoreless shortly after suggested another day of frustration was in store.

Flynn sent Galway five clear, 0-20 to 0-15, in the 56th minute and all was well for the men in maroon. Then came the sucker punch.

Having denied Kilkenny a goal opportunity until that point, Galway imploded. Hogan flicked a ball away from Daithi Burke, keeper Murphy rushed off his line and Hogan flicked it past him before batting the ball to the goal.

Seconds later, TJ Reid caught a high ball in, sent Joseph Cooney the wrong way with a shimmy and rattled the net.

Galway got off the canvas to jab their way back in front, with 2017 All-Ireland winning captain David Burke and Canning prominent as TJ scored his first point from play.

But Kilkenny smelled blood now and closed out the game with four unanswered scores as alarming gaps began to appear in the Galway defence.

Murphy again came off his line and didn’t gather, Hogan firing over the bar with the goal gaping. Conor Browne hit his second to level it – 2-18 to 0-24.

Keoghan finished off a fine passing move and the last word on the scoresheet was left to the 2014 Hurler of the Year Hogan.

Deep in stoppage time, the superb Padraig Walsh claimed a long desperate ball in and Fergal Horgan blew it up.

Yet again, Kilkenny get their rewards for persisting in a game they could have thrown the towel in.

There were no fans to cheer the comeback but the roars of satisfaction from the players told you just how much this victory meant. 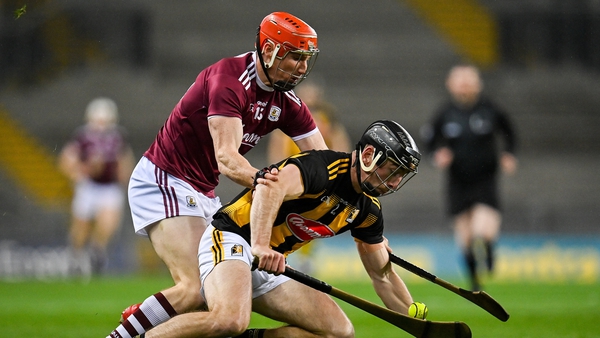