Limerick manager John Kiely says he's expecting a close game in the Munster SHC final against Waterford, despite his side being huge favourites for the match.

While they gave up their grasp on Liam MacCarthy with a surprise defeat to Kilkenny in July of last year, they're many people's pick to reclaim it at the start of next month.

But Kiely says he's not looking beyond Sunday, and that, despite the wins over Clare and All-Ireland champions Tipperary, there are plenty of areas that have needed work over the last two weeks.

"We'd be far from happy with the overall performances," said Kiely.

"The first day against Clare in the first half it was 0-15 apiece. There wasn't much in it and we didn't really get into a rhythm that we'd be happy with.

"We conceded 17 scores to one individual player on the day.

"Against Tipperary, up until the 65th minute maybe, there was only two scores in it and Tipperary had a couple of chances.

"In the league we saw an awful lot of positives from the Waterford team in terms of their work-rate, their energy, a lot of fresh faces on the team.

"They're very secure at the back. Tadhg de Búrca is back - an incredible player who can cover the ground. Jamie Barron in the middle of the field, the Bennetts up front.

"Dessie Hutchinson has arrived on the scene with his experience from Ballygunner.

"So there's a lot for us to go after. That's the challenge really, to get the attitude right. And to express that attitude on the pitch when you get there." 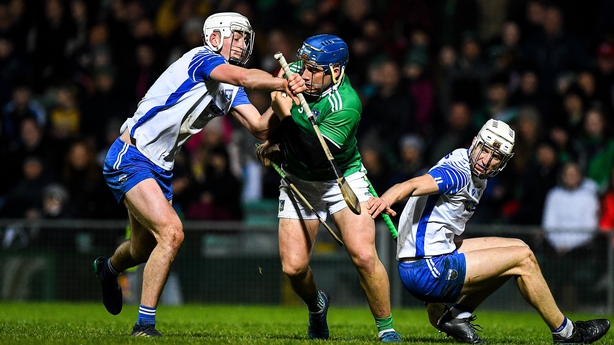 Looking at preparations for games in these Covid-19 times, Kiely admitted that one area has been difficult to deal with.

"On match day leaving 10 of the panel at home, and some of the backroom - that's been a real challenge.

"It's been very disappointing that we've ended up in that situation. I know it's the same for every other team, but I think the players have made a huge sacrifice to make sure this championship goes ahead.

"We're only talking about a very small number of people accessing the stadium to be with their colleagues on match day, and I really feel that this is something that needs to be looked at.

"From the point of view of maintaining the unity of the purpose of what we're about, and in terms of rewarding the players for the amount of effort and time they've given."

Waterford come into Sunday's final having lost their last four Munster finals, with 2016's defeat to Tipperary by 21 points being their most recent appearance at this stage.

Their trip to the 2017 All-Ireland final suggested that they might be about to finally make a first national breakthrough since 1959, but two manager changes since left them facing into this year's championship as something of an unknown quantity.

Liam Cahill was brought in to replace Paraic Fanning, who only had one season at the helm, after guiding Tipperary to back-to-back under-21/20 All-Ireland titles in 2018 and 2019.

"Waterford always had good hurlers down through the years, good stick men, well able to move that ball around," he says when asked of the view of the Déise from the outside.

"People will say we're more conducive to a summer team with the way we play. But championship is what it is now, taking place in November, and we just want to perform to the level we know we can."

Waterford's victory over Cork was an upset rather than a shock, given that they had beaten the Rebels twice in championship since 2015.

"People will say Cork didn't do themselves justice on the day, I felt we applied ourselves well," Cahill points out.

"But there are areas we need to improve on. I think we had 14 wides in the first half. That won't be acceptable, or go anyway near to winning a Munster final.

"We have to take our chances when they arise."

"Limerick are a big, powerful team throughout the field, and they love to impose their physicality on opposition. We will really have to match that, and to use our strengths to keep it as open as possible on the day to give ourselves a chance.

"They're going to take a lot of watching. If we can win those battles, we'll give ourselves a chance.

"Finals are finals and anything can happen."

Follow along with our live blogs on RTÉ.ie/sport and the RTÉ News app, listen to commentary on RTÉ Radio's Sunday Sport or watch the Munster SHC finals live on RTÉ2 and the RTÉ Player with highlights on The Sunday Game, RTÉ2, 9.30pm