Clare will face Wexford in a mouthwatering All-Ireland SHC second-round qualifier this weekend after the draw was made on Monday.

The other qualifier should be eagerly anticipated, as the two strongest teams in the Munster championship, in terms of tradition, face-off against one another, Tipperary against Cork.

Brian Lohan's Banner men squeezed past Laois on Saturday in the first round thanks in large part to another towering Tony Kelly performance, and they will square off against the Model Men in MW Hire O'Moore Park at 2pm on Saturday.

Cork and Tipperary will throw in at 4pm in the LIT Gaelic Grounds in Limerick.

Fitzgerald is sure to have his team fired up for a showdown with his native county as they enter the last-chance saloon.

The counties last met in championship in 2018, when Clare won a qualifier at Páirc Uí Chaoimh, while Wexford famously ended the reign of Fitzgerald's Bannermen as All-Ireland champions back in 2014 after a replay at Wexford Park.

Tipp were beaten in Munster by many people's favourites for Liam MacCarthy, Limerick, while the Rebels beat Dublin at Semple Stadium on Saturday to progress through the back door.

Tipperary won the last championship meeting of the counties in the summer of 2019 by seven points. 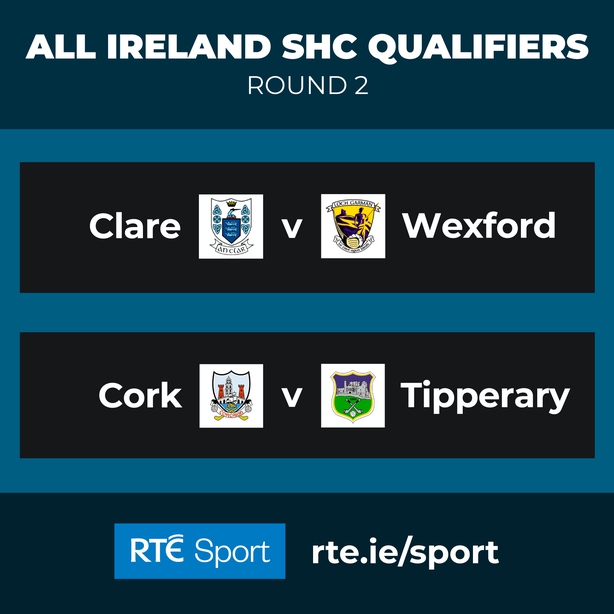 Follow both qualifiers via live blogs on RTÉ.ie/sport and the RTÉ News app. Watch Clare v Wexford live on GAAGO and listen to commentary of both games on RTÉ Radio's Saturday Sport.