For Cavan manager Mickey Graham, it was a case of the result being more important than the performance as his side got the better of Antrim in the Ulster SFC quarter-final.

Greater composure from Graham's outfit in the second period eventually saw them prevail 0-13 to 0-09 at Kingspan Breffni Park, but not before the Saffrons had made life difficult for the hosts.

Speaking afterwards to RTÉ's Saturday Sport, Graham was not surprised that this was a game that had to be dug out.

"It was a typical Ulster game where Antrim came with a gameplan and made it very difficult for us," said Graham.

"They frustrated us for long periods and it took us a while to get to grips with it.

"We got a couple of scores at vital times and I'm just delighted - it was all about the result today, more so than the performance."

Graham rebuffed any talk that Cavan were in anyway complacent in advance of the fixture, but did highlight the hectic schedule, a schedule that saw no time to rest after the conclusion of the Allianz League. 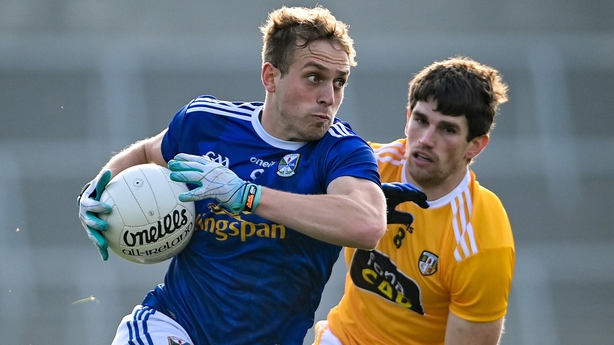 "I don't think there was any complacency as we have great respect for Antrim and knew the threat they would pose," he added.

"This is our fourth week of games - we've had Kildare, Roscommon, Monaghan and this game - so they were tired bodies and a few lads with knocks. You could see it took its toll at various stages during the game.

"We knew there would be small margins in it. Antrim would be well drilled and that's exactly what they were. But we were creating lots of chances, it was a question of converting those chances.

"Missing chances gives the opposition heart and we played into their hands at times. We did not do it as much in the second half."

Next up for Cavan is a date with either Fermanagh or Down next weekend in the provincial semi-final, with Graham, not surprisingly, well aware of the main requirement. "We'll have to try and get the bodies freshened up for out fifth game in a row and hope that we have no serious knocks."

Graham's opposite number Lenny Harbinson was left to rue "one that got away".

Also speaking to RTÉ Sport, the St Gall's clubman highlighted the 15 minutes just after the break as crucial.

"If we had the goal (Patrick Gallagher chance), that would have built enthusiasm and energy. It just didn't pad out that way.

"The final third is where you need quality football. That's no disrespect to the guys we have, they put a massive shift in, but we just needed that bit of composure."