Offaly claimed their first Leinster SFC win since 2016 with a three-point victory over Carlow in Tullamore.

Carlow trailed by eight points with 12 minutes remaining but scored six times without reply to ensure an exciting finish.

However, Cian Farrell kicked a security score late on to secure Offaly's progress to the quarter-final.

Next weekend's opponents Kildare certainly didn't see anything to cause them sleepless nights as Offaly barely survived a late comeback.

Coasting towards victory when they led by 3-13 to 0-14 with 13 minutes left, the hosts almost coughed up that eight-point lead in the closing quarter.

A 58th-minute black card for impressive Offaly sub Farrell helped Carlow's cause and displaying great spirit, they scored six points on the trot to cut the gap to just two points in added time. 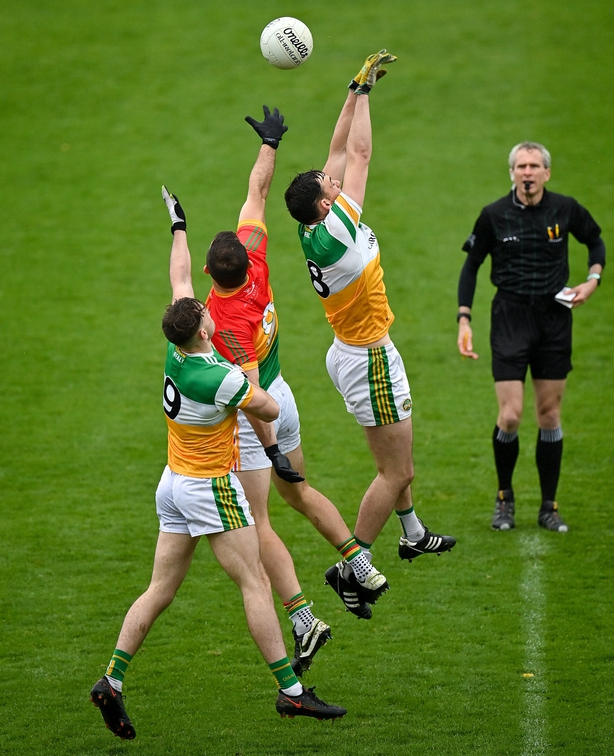 A further three minutes were played but Carlow didn't threaten a match-saving goal and Farrell kicked the closing point as a relieved Offaly held on.

A pivotal moment had come in the 54th minute when excellent Carlow full-forward Chris Blake blasted a penalty over the bar and a goal here could well have saved their bacon.

Having said that, Offaly could very easily have doubled their goal tally as the Carlow defence looked vulnerable all afternoon and the visitors should not pinpoint the penalty miss for the defeat.

It was an entertaining, high-scoring game but that can't disguise the surfeit of mediocre football that was played by both sides and on this form, it is impossible to envisage the Faithful County being around at the business end of the campaign.

Their manager John Maughan admitted afterwards that considerable improvement is needed against Kildare and he referred to the errors that were made and the lack of movement that was prevalent at times.

A second-minute Niall McNamee goal gave Offaly the initiative but with Ross Dunphy and Chris Blake causing a lot of problems, Carlow deserved to be level, 0-05 to 1-02, after 14 minutes. 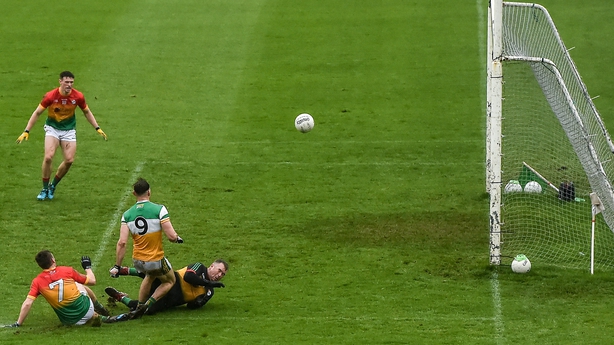 A superb Hayes goal gave Offaly back the lead in the 18th minute but he dislocated a toe in the process of shooting and had to be replaced.

Carlow again fought back to level terms but Offaly finished strongly to lead by 2-06 to 0-09 at half time – Niall McNamee missed a great chance to kill off the Carlow challenge when shooting wide before the break.

Offaly were still three points ahead when Allen got their third goal in the 51st minute after wing back Colm Doyle raided up field.

Carlow got the next two, including that penalty, but Offaly then hit three on the trot for what seemed an untouchable eight-point lead.