St Thomas’ made it three Galway SHC titles in a row when they came from behind to oust a Turloughmore side bidding for their first crown since 1985 at Kenny Park in Athenry.

A goal from captain Conor Cooney gave the champions a glorious start but they went in level at 1-06 to 0-09 at the break having played with the wind.

Turoughmore lost captain Daithi Burke to a leg injury just before the break and while he returned in the closing stages, he was unable to save the day as St Thomas’ pushed on to collect their fifth crown.

Turloughmore were in strong contention to claim their ninth crown after the opening half.

But the experience picked up by St Thomas’ since winning the first of their five titles in 2012 stood to them in a gripping contest.

The tempo of the game was set from the outset when Sean Linnane pointed after 18 seconds for Turloughmore before captain Conor Cooney hit the net inside a minute for the champions after he collected a loose ball 20 metres out.

The sides continued to trade points throughout the opening half, with former Galway captain Fergal Moore landing two superb efforts from distance for a Turloughmore side back in the final for the first time in 30 years.

Cooney then gave St Thomas’ a dream start with a goal inside a minute when he pounced on a loose ball. 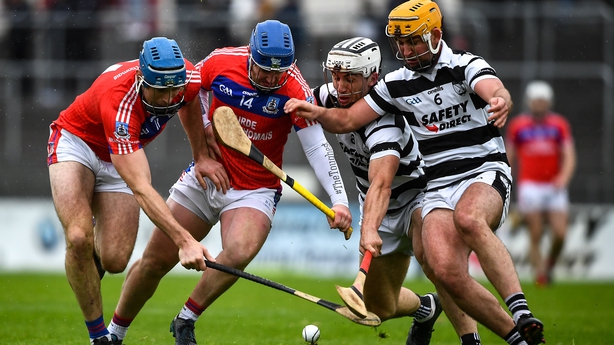 Darragh Burke and his cousin Fintan Burke, an inspiration at full-back this season, hit good scores for the champions and Cooney landed a third free but Turloughmore hit back.

Gary Burke got a good point from play and Linnane and Matthew Keating also found the target to draw level by the break, but they suffered a big blow captain Daithi Burke limped off, although he came back on in the closing minutes.

James Regan and Walsh exchanged points after the restart before efforts from Gary Burke and Oisin Flannery pushed St Thomas’ 1-9 to 0-10 in front after 39 minutes.

Keating landed his second for Turloughmore and an exchange between Cooney and Barry Callanan left St Thomas’ 1-10 to 0-12 in front with ten minutes left.

Oisin Flannery and Linnane swapped points before a disputed effort from Sean Loftus was awarded and Turloughmore were level.

Turloughmore sensed victory when Linnane, a nephew of former Galway defender Sylvie, hit his fourth point of the contest to edge them in front six minutes from time.

But that was as good as it got for Turloughmore and even the return of skipper Burke couldn’t save them as Cooney levelled with his sixth free and the title was secured when Eanna Burke and sub Brendan Farrell hit late points.