Naomh Mairtin picked up their first ever Louth senior title at the expense of Ardee St.Mary’s in the Louth Centre of Excellence in Darver.

Having lost the previous two finals in a row, the Monasterboice outfit learned from the heartbreak to finally compose themselves over the line. Sam Mulroy was the orchestrator, his ice cool place kicking provided the platform for their historic success.

Both sides shared the last four minor titles between them yet nerves were a real issue as Ardee missed two early free’s and Naomh Mairtin struggled to build any sort of attack. Eoghan Callaghan did eventually open the scoring with a neat finish.

Ardee soon grew into the game with Conor Gillespie and Kian Moran finding the range before one of those Monasterboice winning minors last season Tom Grey fired over a score beyond his years, to level the game.

Right before the water break Conor Whelan denied a certain goal and it was compounded with Stephen Campbell picking up a black card. Mairtin's manager Fergal Reel had time to regroup and Val Leddy soon gave them the lead.

With the extra man St. Mary’s crucially didn’t make it count, and to compound matters two shining lights in their run to the final, Ciarán Keenan and Darragh McConnon missed two excellent goal chances either side of a Kian Moran penalty. Credit to the county net minder Craig Lynch with an excellent save, he went on to become man of the match. 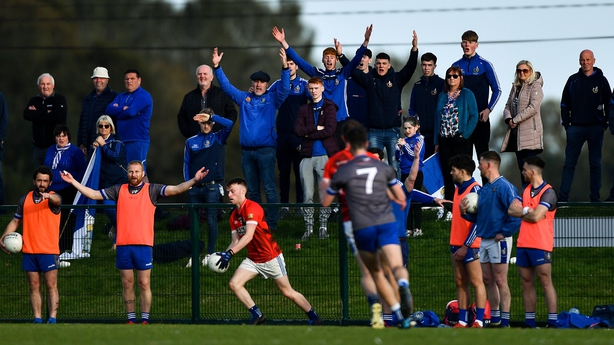 Hanging on by their finger nails, Naomh Mairtin showed the required grit at the other end to sink Ardee’s morale in this match defining period. County star Sam Mulroy ended the half with three well taken frees to make it 0-06 to 0-03 in favour of the Monasterboice outfit.

Conor Whelan shone in the second half, setting the tone with the first score, quickly followed up by Mulroy. Substitute Paudy Clarke raised hopes for Ardee but they were short lived.

With the next attack Whelan ruthlessly opted to drive for goal instead of taking the easier option of a point. The finish was sublime and from that point on the Mairtin’s were never going to release their grasp on the Joe Ward Cup.

Despite a late Liam Jackson penalty, Mulroy boomed over the last two points of the absorbing final to confirm their date with destiny