King Henry Shefflin may have relinquished his throne but Ballyhale Shamrocks remain the ruling force in Kilkenny, comfortably securing a three-in-a-row of SHC titles.

James O'Connor was tasked with following back-to-back All-Ireland winning boss Shefflin earlier this year and found no slippage in his ranks, with the Shamrocks winning their 18th county title in style.

They were utterly dominant at a sun-kissed Nowlan Park with Eoin Reid blasting 2-02 and Colin Fennelly, Brian Cody and Eoin Cody also among the goalscorers.

TJ Reid was relatively quiet as he duelled Kilkenny colleague Cillian Buckley for much of the game though still finished with 0-08 and two from play, picking up the man of the match award for his efforts.

Ballyhale had 10 different scorers in total and also had 2019 Young Hurler of the Year Adrian Mullen sitting in the stand wearing number 25, a boost to Kilkenny just seven months after his cruciate injury.

The only disappointment for the Kilkenny kingpins is that this is the end of the line for 2020 with no provincial or All-Ireland competitions to be contested.

They were sluggish after the mid-summer restart but found their form in the championship and powered to this 21-point win. 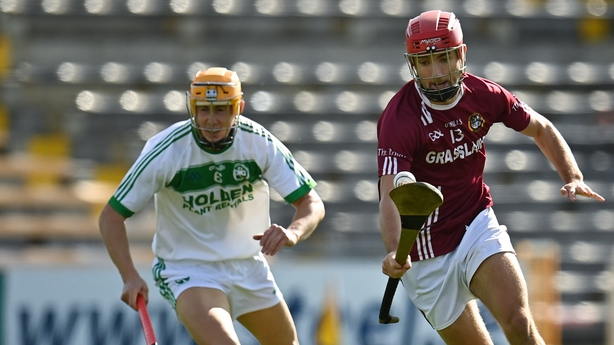 County attacker Bill Sheehan (above) opened the scoring for Dicksboro in the fourth minute - but it was virtually all downhill from there for them.

They trailed for the first time in the sixth minute and quickly fell into Ballyhale's slipstream as the favourites cruised confidently clear.

Ballyhale were 0-05 to 0-01 ahead in the 13th minute when Brian Cody struck their first goal to put serious daylight between the teams.

The goal came from a turnover in the Dicksboro defence with Tom Kenny disposed after initially winning a long free in and Cody took full advantage with a clinical strike.

It was the worst possible start for a nervous looking Dicksboro whose defence was vulnerable, Eoin Reid also pinching a Shamrocks point from a turnover.

Fennelly was stationed at full-forward for the holders and found himself isolated in dangerous one-on-one positions with full-back Evan Cody on a couple of occasions.

It was just what Fennelly wanted and he drew an early free that led to a TJ Reid point before escaping his man for a 21st minute goal.

The experienced Cats star repeated the habit of a lifetime by seizing possession and losing his marker with a neat turn before blasting home.

Dicksboro did respond with five of the next seven points before half-time but Ballyhale still led by an impressive 2-09 to 0-07 at the interval.

Dicksboro cursed their poor shooting with eight wides in the half and just two points from open play, through Sheehan and sub Andrew Gaffney in stoppage time.

They had used three subs by the 33rd minute and clearly had a mountain to climb to repeat their 2017 triumph.

They never came close to reeling in rampant Ballyhale and the game was effectively up with Eoin Reid slammed two goals inside 90 seconds, the first coming in the 50th minute.

Eoin Cody showed great skill under a high ball in to convert their fifth goal in the 53rd minute as Ballyhale rolled on their subs late on to experience one of the club's greatest ever county final performances.