Former GAA President Liam O'Neill has aired his strong belief that there is a real danger in getting back to playing Gaelic games too quickly.

On Friday the Government announced that Phase 4 of the country's emergence from lockdown would be brought forward to Phase 3.

The GAA's initial date for the return to contact training was 20 July and Croke Park but the early enactment of Phase 4 means that contact training can now begin when the pitches reopen, which was due to be on 29 June.

On Saturday afternoon it was announced that GAA pitches will now open this Wednesday - five days earlier than anticipated - following a meeting of the Association's Covid-19 Advisory Group.

O'Neill, who was speaking to RTÉ Radio 1's Saturday Sport before the latest announcement was made on Saturday afternoon, said "we're not in control of this pandemic" and that he feared "we're taking a foot off the caution pedal".

"We're in a pandemic," he told Damian Lawlor.

"This is a danger that's out there lurking. It's like looking out into the dark as a child, when you couldn't see what was out there. You were naturally conservative and careful. I think at the moment we don't know where this virus is.

"We have been magnificently led through this problem by our medics and our politicians. I'm just worried that we're taking a foot off the caution pedal at the moment." 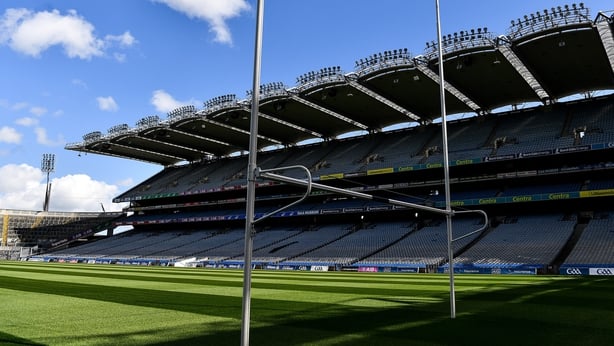 O'Neill served as GAA President from 2012 to 2015. He said the current incumbent John Horan and the director general Tom Ryan are under "huge pressure" to get every decision right in trying circumstances.

"Business people will tell you that if you make 51% of your decisions and they turn out to be good decisions, and they're right, you'll be a success in business. Unfortunately in the GAA, we have that many people who are interested in what we do and who comment on what we do, we have to get 100% of our decisions correct or we are under awful scrutiny.

"Whatever we do has to be guided by safety first, that's the prime concern.

"Maybe we're okay at the moment, but I know historically, in all pandemics there's been a second wave. I just hope we're ready for it and I hope we don't do anything now that will make that worse."

O'Neill accepted that Irish society has to return to normality as best it can and as soon as possible but he said that the GAA has a responsibility to put the health and safety of its members above everything else.

"If you get a virus into your family by being careless, you only lose a grandparent once."

"We really have a huge responsibility. I said from day one... our responsibility, as an organisation and as a country, is to get as many people over the line before this pandemic peters out, and it will peter out at some stage. We have to make sure we don't lose people.

"If you get a virus into your family by being careless, you only lose a grandparent once. There's no amount of money that can make up for that. Take an eight-year-old child that has a grandparent who could possibly live for ten years longer in the normal course of life.

"The enrichment of having grandparents is absolutely invaluable, just invaluable to have contact with an older person, to have the love that's exchanged between grandparents and grandchildren.

"We can't sustain what's happening at the moment financially in the country. I know we have to get back, but we have to do it with caution. I think that sport is being pushed into opening up.

"I watched part of a game last night between Southampton and Norwich - it was like watching like FIFA virtual soccer that my son played 20 years ago on a games console.

"It didn't add up to sport to me. If we're going to do this around the country and not have people at the games, maybe we should ask ourselves if it's really necessary."