The team’s playmaker stands out with a flock of blonde hair and her countless tattoos, but it’s her natural skill on the ball that really catches your eye.

Back in Sean Finnegan’s squad following a year out due to injury, Archibold has blended her first love of Gaelic football with her second of soccer.

A top class handballer in her day too, Archibold was thriving on the inter-county scene this year and retains hope that Westmeath will get a chance to build on their positive Lidl National League Division 1 campaign at some stage.

"It was great to be back in with the county. I took the year out last year because I was injured. I have had some lower back problems that I’ve had over the years. I wanted to take a few months out to try and get it sorted," said 31-year-old Archibold.

"I went back playing a bit of club football to ease my way back in and soon enough Sean was on to me at the start of the year to come back and join the panel. Sean can be very persuasive, although it didn’t take much convincing.

"We had a bit of a talk: I have other commitments too, I play a bit of soccer and I wanted to make sure I could work around both seeing as we were halfway though the soccer season at that stage. I didn’t want to let either team down, I was just delighted to be back playing Division 1 football.

"Personally, I’m getting there, I’m not playing as well as I’d like to but I was hoping that come championship time, that’d be my time to play my best football."

Westmeath were promoted to Division 1 of the Lidl NFL back in 2017.

Back in 2011, they gained Senior Championship status with TG4 All-Ireland success, a trophy win that Archibold missed out on due to handball commitments.

While she was away from the squad last season, Westmeath slipped out of the senior grade again.

But 2020 brought with it renewed optimism and excitement – and the attraction of competitive summer football was the driving force.

"Last year was a disappointment obviously, but we took in a lot of new girls on the team this year. Sean has been trying to build the panel back up and I suppose playing Division 1 was always going to be a benefit to us going to play Intermediate football. 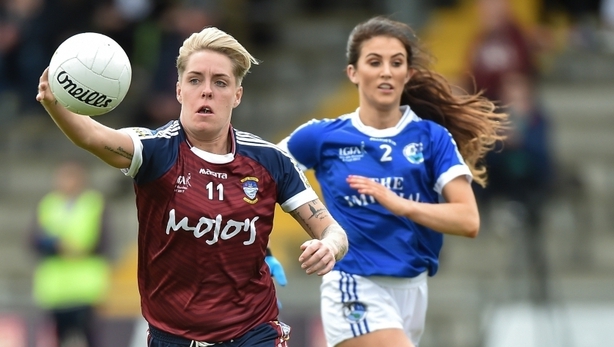 "We were really looking forward to playing it. After beating Donegal in the League we proved that we are there or thereabouts. We are close enough to the top teams, Mayo only beat us by a couple of points too. Obviously we weren’t going to win Division 1 but each game was working towards that Championship.

"The confidence was there, we definitely thought we could go on and win Intermediate this year. That helps you with the training. I have never personally played in Croke Park. The year they won the All-Ireland I wasn’t playing. It would have been nice to have that to play for too."

For now, training is confined to her backyard gym and a 2km radius from her home in Mullingar, which takes in a scenic run on the banks of the Royal Canal.

And more than ever, Archibold is clinging on to the familiarity of training, with work on hold due to Covid-19 restrictions.

"I’m working in a pub at the moment, but it could be a long time before I’m back with that.

"I am still training away now. The management send us a programme every week. It’s a four or five day programme so it gives us something to do most days, be it running or weights.

"There are a couple of 5k runs and sprints in there, just to keep us fit. Tommy Carr takes us for our strength and conditioning class through Zoom one evening a week as well. We are keeping on top of things as best we can."

The St Loman’s club player certainly is a talented footballer, but on the soccer fields she shone for Ireland underage, while she also represented her country at the handball World Championships. But the lure of Ladies Football is always the strongest.

"I played underage with Westmeath and I captained the minor B Leinster team one year when we beat Offaly in the final. I played up through the grades with Westmeath. I gave it up for a few years when I was playing handball as well as soccer.

"Handball got top priority for a couple of years and I stopped playing county football when I was 19. I went over to the World Championship in Canada that year.

"At the moment I play soccer with Mullingar Athletic in the Midlands league. We were actually only one game away from winning the league when all the games were called to a halt.

"It was busy enough when they both crossed over. I trained Monday, Wednesday and Friday with the county and a game would be the fourth day every week. There was one day overlap with the soccer so I only trained one day with them.

"It was working out well for me, the soccer league should have been over and championship would have been starting. But what I was really looking forward to was playing in the Intermediate championship. Hopefully we’ll get back at it soon."