In the latest in this series on the greatest matches he ever witnessed, RTÉ GAA commentator Darragh Maloney looks back at that 2001 All-Ireland SFC quarter-final between Kerry and Dublin in Thurles.

2001 was an historic year for the All-Ireland Football Championship.

It was the first season of the qualifier system, which was described as the most significant change to the championship structure in over 100 years.

We have become so used to it but it was a huge break from tradition 19 years ago.

There was to be a second chance for counties beaten in their provinces.

The new format saw the introduction of the quarter-finals, which would feature a provincial champion against a winner from the fourth round of the qualifiers.

The draw that year had a major headline act as the reigning All-Ireland champions, Kerry, were drawn to face Dublin.

That was just as well because the rest of the draw threw up three games we had seen already. Roscommon and Galway; Derry and Tyrone; Meath and Westmeath. They had already played each other in their respective provinces.

In 2001, only one of the quarter-finals took place in Croke Park. That was the all-Leinster clash of Meath and Westmeath.

The stadium was in the middle of redevelopment and the Hogan Stand was only one tier high by early August.

The GAA needed another solution and settled on Semple Stadium in Thurles, which could cope with the expected attendance. Castlebar and Clones were the other last-eight venues.

The debate about Dublin playing in Croke Park was years away and the situation they found themselves in, was very different to recent times.

Dublin had not won a Leinster title for six years and had been overtaken by Meath and Kildare since they won Sam Maguire in 1995.

Despite their loss to Meath in the '01 Leinster decider, they had been making good progress under manager Tommy Carr.

.@Darrenfrehill will be looking back at this epic encounter between Dublin and Kerry on today's Favourite Sporting Moment #RTEGAA

The fact that this game was being played in at Semple Stadium added a huge novelty factor to the serious business of Dublin against Kerry.

The ground brought back memories of the music festival 'Féile' or 'The Trip to Tipp' as it became known.

This was the first multi-day music festival in the country and was a huge success.

The annual staging of the event in the early 90s helped clear the debt built up on upgrading the stadium for the Centenary All-Ireland hurling final in 1984.

When the Kerry-Dublin match was fixed for Thurles, the exodus of football fans from the capital became known by some as 'The Trip to Tipp Two'.

Some Dublin fans also had good memories of another journey to Munster when they beat Cork in Páirc Ui Chaoimh in 1983 but in 2001, Kerry were the firm favourites and not too many disagreed with that. 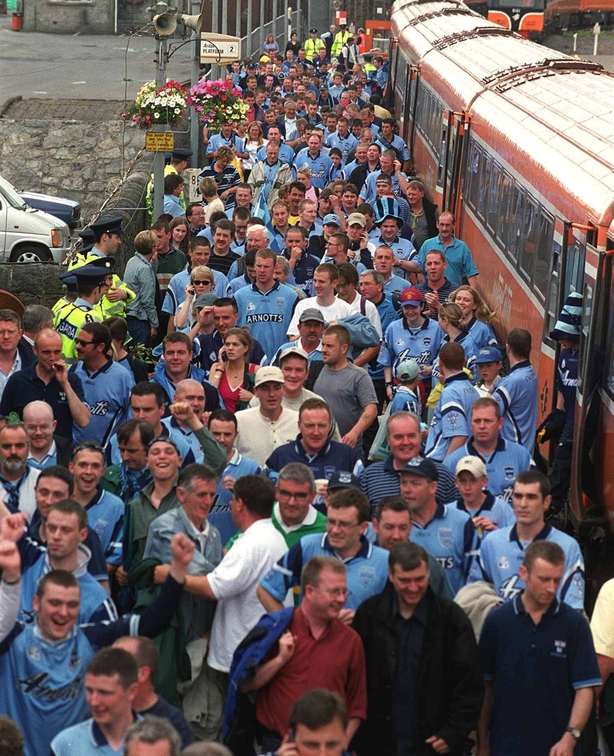 I was the sideline reporter that day but like a lot of the supporters leaving the city, I totally misjudged the volume of traffic and nearly missed the start of the match.

We didn't have the motorway network we have now and there were stories of fans turning back in Kildare and heading home, such was the gridlock on the roads.

The game wasn’t a classic but the occasion was terrific and the atmosphere was electric.

Kerry were in charge for most of it and were seven points clear with 10 minutes to go.

The remainder was dominated by two substitutes – Vinny Murphy of Dublin and Maurice Fitzgerald from Kerry. Murphy had burst onto the scene in the early 1990s and was a super forward who had played four years of football with Kerins O’Rahillys at the end of the decade.

Fitzgerald was a genius who was in his last year in a Kerry jersey.

Murphy (below) came on in the 57th minute and his introduction brought about an incredible revival. He scored a goal, they added another from Darren Homan and were a point up in added time. Fitzgerald had been brought on in the 65th minute. 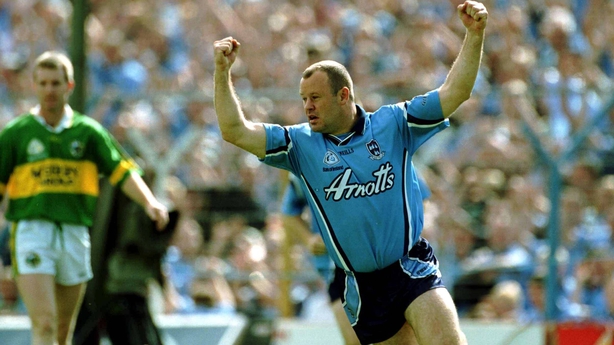 Dublin were a point clear when their goalkeeper, Davy Byrne, fired his kick-out straight out of play on the 45 metre line. What followed was perhaps the best example I have seen, of a player executing under the most incredible pressure.

Carr was an animated presence on the sideline that afternoon.

He had been involved in a major on-field row with referee Michael Curley which led to the Dublin boss having to watch the replay in the stand.

Fitzgerald had not touched the ball when he was presented with the sideline kick more than 45 metres out. He had Carr close by, shouting at him as he kicked the ball.

But it still curled beautifully off the outside of his right boot and tracked from beyond the far post to between the posts. It was a sensational moment of skill, calmness and composure from a gifted player.

In another twist to a pulsating finish, Dublin’s Wayne McCarthy could have won it but his ‘45 was into the breeze and fell just short.

The replay was the following weekend. I arrived in Thurles at 10.30 that morning – once bitten and all that!

Johnny Crowley scored 2-02 and Kerry were able to cope with the sending-off of Tomás Ó Sé, who was given a straight red card for a challenge on Collie Moran.

Kerry were again in control for a lot of the match but survived two late Dublin goal chances to win by three points.