Úna Jackman smashed a match-winning goal in the fourth minute of injury time to snatch victory for Gailltír in the AIB All-Ireland Intermediate Club Camogie Final.

It was sweet redemption for the Waterford side after losing last year’s decider by a point to Clonduff and it looked as if they would miss out this time too, when St Rynagh’s turned a three-point interval deficit into a one-point advantage before the three-quarter mark, and led by two with only seconds remaining.

There was one last chance though, as Trish Jackman sent a free into the danger zone.

Heroically, Shauna Fitzgerald somehow made a clean catch amid a slew of bodies. Surrounded though, the midfielder still had a lot to do.

Seeing a blue jersey on her inside left was one thing, somehow freeing her arm and being able to pass to her was another.

She managed it though and now it was down to the no 22, who gathered quickly.

Though a point would have levelled, the forward’s instinct kicked in and Jackman Jnr instinctively let fly with as clean a strike as she could have hoped for, dispatching the sliotar to the roof of the Rynagh’s net.

The war dance that followed as she continuously punched the air on the way out told us she knew it was the winner.

Just to make sure, her sister planted a free from the restart and the final whistle followed.

The Offaly crew began by drawing Louise Mannion out and looking to isolate chief scorers Siobhán Flannery and Kate Kenny inside.

While Kenny scored a brilliant point in the sixth minute in response to Ciara O’Sullivan’s opener for Gailltír, the dangerous duo struggled to get into the game due largely to the midfield dominance of Kate Lynch and Shauna Fitzgerald, while Emma Roche and Trish Jackman, the latter the spare defender, intercepted a lot of intended deliveries.

Ellen Gilligan made a good save from Emer Walsh but Walsh was in fact the only Gailltír forward not to get on the scoresheet by the interval, skipper Áine Lyng and full-forward Aoife Fitzgerald hitting two excellent points from play and Anne Corcoran adding a beauty from the shadow of the Hogan Stand.

Mark Dunne brought Flannery out to the half-forward line by the start of the second quarter but with five minutes of the opening period left, the margin was five and it could have been more.

Rynagh’s struck the last two scores of the half however, Flannery landing a whopper of a free in the 27th minute and from the very next passage of play, the inspirational Linda Sullivan split the posts to make it 0-7 to 0-4. 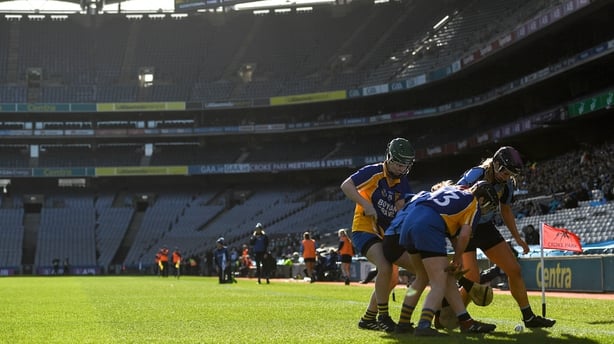 Just as important was the intervention of Daly at the other end, right on the half-hour, getting a touch to a pass across the square that prevented an almost certain Gailltír goal.

Just as she did in the opening period, Ciara O’Sullivan slotted an early point for the Déise contingent, after some neat footwork by Lyng but Rynagh’s riposte was instant and apparently definitive.

The stiffening wind was in their favour more often than not but there was a far greater energy about them, while Elaine Sullivan, on her own on the edge of her own square, gobbled up many aimless Gailltír deliveries

Flannery, who was named official player of the match although Kenny, Sullivan, Lyng and Shauna Fitzgerald must have run her very close, converted a free either side of two splendid scores by the superb Kenny.

When Flannery was tripped, she made no mistake to bring the teams level.

Kenny put two between the sides in the 43rd minute and Rynagh’s were the likeliest winners at this juncture but Annie Fitzgerald showed admirable composure, particularly given her inability to exert any influence in general play, by slotting two frees either end of a strong score by her cousin Shauna Fitzgerald and suddenly Orla Murphy’s charges were in front.

A splendid solo score from Gráinne Dillon brought the sides level once more though and after Flannery (45) and Annie Fitzgerald (free) exchanged scores, Flannery shot her seventh point and what seemed a worth winner, with a free from the middle of the field with two minutes of regulation time remaining

Rynagh’s seemed to have done enough with Linda leading a tremendous defensive effort but they were to be denied at the death and the day was Gailltír’s.