Clare eased into the last four of the Allianz Hurling League after completing an unbeaten group stage campaign following a nine-point victory over Dublin in Ennis.

Requiring a win or draw to clinch Group B, the home side's bright start in front of an attendance of 3,360 amounted to an eight-point unanswered rally before being fully reeled in by by the break.

However, with the wind at their backs, Clare moved swiftly through the gears on the turnover to outscore their opponents by 0-16 to 0-07 and advance directly to the semi-finals.

New midfield pairing Tony Kelly and David McInerney dominated matters once more, combining for 16 points of their side's handsome tally, with the latter contributing four points from play in an impressive display.

Indeed, Clare had nine different scorers from play over the 70 minutes including impact substitutes Aron Shanagher and Gary Cooney whereas Dublin relied heavily on Donal Burke (0-10) to keep his side in touch.

Burke's three-point haul in as many minutes of the throw-in suggested that wind-assisted Dublin were ripe for an upset.

However, once Tony Kelly regained parity with a brace of placed balls by the ninth minute, Clare would seize full control with a further six points without reply over the next ten minutes.

David McInerney (2), Domhnall McMahon (2), Shane O'Donnell and Diarmuid Ryan powered the hosts to a 0-09 to 0-03 cushion, a six-point margin that would remain by the half hour mark before a late Dublin backlash. 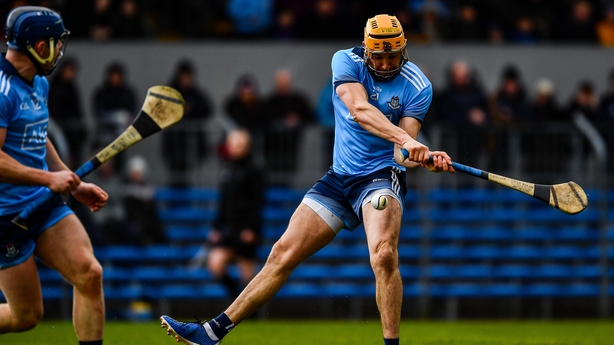 Substitute Eamon Dillon (above) made his presence felt with a bullet goal, with points from Burke and Paul Crummey amazingly levelling up the tie by the break at 0-11 to 1-08.

Clare would be less forgiving for the new half though as Kelly's frees interspersed scoring cameos for O'Donnell, Shanagher, Cooney, David Reidy and captain John Conlon as the Banner picked holes in a flagging Dublin rearguard to run out deserving nine-point victors.

Having emerged unscathed from an all-Leinster group, Clare now have a three-week break to prepare for their first Division 1 semi-final appearance since 2016.