Tom Morrissey scored 0-7 and holders Limerick moved into the knockout stages of the National Hurling League with an 1-24 to 0-18 victory over Westmeath at the LIT Gaelic Grounds.

Storm Jorge didn't threaten this fixture but it still resulted in heavy underfoot conditions and it didn’t lend itself to fluid hurling.

Limerick raced clear in the first half and held an unassailable nine-point lead at the break, but Westmeath did their best to whittle that down in the second half.

The heroics of Derek McNicholas spurred them on and they were within four points late in the game after Limerick had Darragh O’Donovan sent-off, but the hosts held on and David Dempsey fired a late late goal to put a seal on the win.

Limerick held a 0-15 to 0-6 lead at half-time after they killed off the game early with the wind and rain at their backs.

The rain died down eventually, as did Limerick’s drive to put Westmeath out of sight and out of mind, and Derek McNicholas’ brilliant skills from the deal ball kept the underdogs alive.

On the back of a hammering at the hands of Tipperary, this looked bleak for Westmeath when they fell into a 0-9 to 0-0 deficit after the first half-of-an-hour. 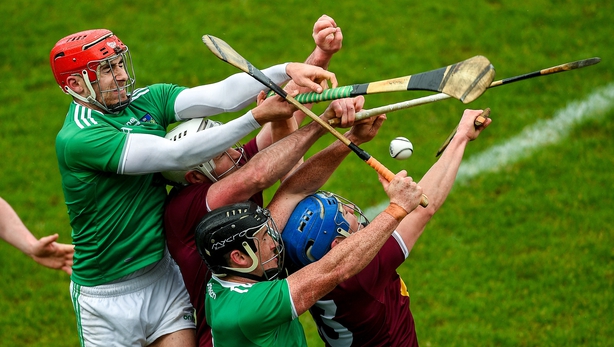 The visitors wouldn’t score until the 18th minute and meanwhile the 2018 All-Ireland champions were rampant.

Darragh O’Donovan was only player to shoot wide for Limerick in the opening ten minutes. David Reidy scored a free after 45 seconds to set the tone and Tom Morrissey raided down the left wing to flash over two points from an identical position for a 0-3 to 0-0 advantage.

Seamus Flanagan’s diagonal runs were causing havoc for the Westmeath defence, and he scored a couple of points with Barry Nash also adding his name to the scoresheet.

Limerick were easing up already, although Reidy scored his third and fourth points for a nine-point lead.

Jack Galvin’s stunning point from wide out on the right was worth the wait when it came, but Westmeath needed goals. Instead, Flanagan and Reidy scored to leave Limerick in a comfortable 0-11 to 0-1 lead after 20 minutes.

Westmeath scored three of the next four points with Reidy’s sixth cancelled out by McNicholas’ free and sideline, and a further point from Shane Clavin.

Shane O’Brien’s side had finally established a foothold but they could only manage two more points from McNicholas before half-time.Reidy (two) and Brian Ryan scored to give Limerick a healthy nine-point gap at the break.

Flanagan could have made it more comfortable for Limerick, he blasted a shot off the crossbar in the 46th minute and two points later Westmeath were within five points.

O’Donovan was sent-off for an off-the-ball incident but timely scores from Ryan and Flanagan settled Limerick.

Then Westmeath reeled off three points in-a-row with substitute Josh Coll scoring twice. His second left it at 0-20 to 0-16 with 12 minutes remaining.But points from O’Connell and Nash sealed the win for Limerick before Dempsey struck in the 69th minute.