Galway are within touching distance of an Allianz Football League final spot after battling back from eight points down in Navan to secure their third consecutive Division 1 win, consigning Meath to relegation in the process.

Padraic Joyce's side trailed by 1-06 to 0-01 late in the first-half but fought back to win by two points, an impressive 10-point turnaround in difficult conditions in Navan.

Talisman Shane Walsh top scored with 0-07 including the last two points of a wind and rain battered encounter, sealing a gutsy win for the in-form visitors.

There was a strong cameo too from Paul Conroy who struck four points after coming on as a substitute late in the first-half while Corofin's Ronan Steede hit the Tribesmen's goal.

The win leaves Galway clear at the top of Division 1 though Andy McEntee's men are officially relegated following their fifth defeat in a row.

They'd entertained outside hopes of beating the drop beforehand and raced into that big lead early on but were outscored 1-13 to 0-06 from late in the first-half onwards.

Galway's initial plan was to pick up at Pairc Tailteann where they left off last weekend in Tuam, beating Tyrone with ease, but they were overwhelmed by a surprisingly strong Meath start.

With 31 minutes played, Galway had only registered one point, a Michael Daly effort in the 10th minute.

Meath were aided by a stiff wind but were also hungrier and more efficient with the hosts racing into a 1-06 to 0-01 lead after half an hour.

James Conlon, the small but speedy and ultra sharp corner-forward, scored three of those points for Meath from play.

Ethan Devine struck for their goal in the 16th minute, putting Meath 1-03 to 0-01 ahead at that stage.

It was a fine goal as Meath poured forward in numbers to support full-back Conor McGill's burst out of defence and Bryan McMahon eventually fed Devine who blasted low and hard from the left to find the net.

McGill, an All-Star nominee in 2019, was assigned man marking duties on Galway dangerman Walsh, who hit 1-08 against Tyrone, but aside from setting up that goal the defender also played in McMahon for a 30th minute point. 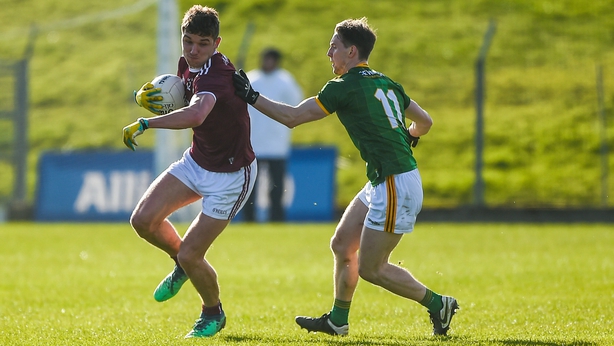 Midfielder Bryan Menton added a point and Galway native Oisin O'Brien was also on the mark for last year's Leinster finalists in a confident and impressive opening.

Galway, crucially, came back strongly into the game before half-time with four unanswered points to trail by just 1-06 to 0-05 at the interval.

Captain Walsh converted three frees in a row and Eamonn Brannigan closed out the first-half scoring with a Galway score that gave the travelling support real heart.

Galway dominated the third quarter and hit 1-02 without reply after the restart, the goal from Steede coming in the 40th minute.

It came from a turnover in the Meath defence when Brian Conlon's clearance was intercepted, allowing Conroy to eventually play in Steede.

Conroy himself then levelled the scores at 1-06 apiece in the 43rd minute and they were tied again twice more in the run in.

Donal Lenihan had a strong impact from the Meath bench and scored three late points, two from frees, to tie it up at 1-12 apiece late on but those two late Walsh points for Galway decided an ultra intense contest.