Kerry emerged as 1-14 to 1-13 winners in the re-fixed Allianz League Division 1 clash as Keith Higgins' late effort went wide to deny James Horan's side a draw in an exciting game in Castlebar.

Despite trailing by nine points at one stage before the interval, the reigning Division 1 champions came roaring back after the restart and almost snatched a draw.

The final whistle signalled Kerry’s third win of the campaign as they stay in the hunt for a League final place while Mayo remain embroiled in a relegation battle after their third defeat in five matches.

Overall, Kerry will feel that they were full value for their third successive league win at Elverys MacHale Park in front of a crowd of 8,069 as they played some excellent football, especially in the opening half, and they held their nerve in the frantic closing stages.

The game had been postponed on Saturday due to the inclement weather conditions, but today’s contest was played out in ideal conditions and proved to be worth waiting for.

A second minute goal from Seán O’Shea got the Kingdom off to a dream start and they would have been further ahead had David Clifford’s powerfully-struck penalty not cannoned off the crossbar three minutes later. 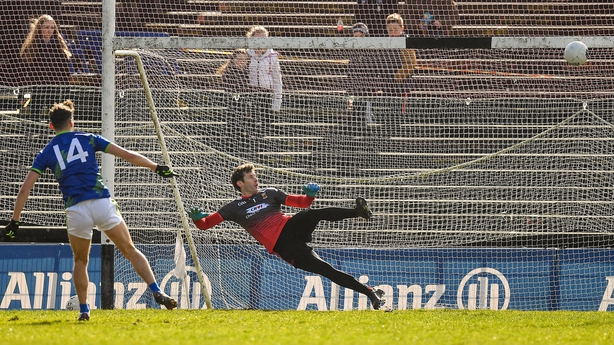 However, Kerry continued to dominate a lethargic homeside all over the field and the visitors led by 1-08 to 0-02 after 34 minutes following a string of excellent points from Gavin White, Dara Moynihan, David Clifford (2), Tony Brosnan and Micheál Burns.

Mayo’s misfiring attack was struggling to make any inroads, and an effort from midfielder Tom Parsons proved to be their only white flag from play before the break.

Two frees from Kevin McLoughlin did narrow the gap though to seven points (1-08 to 0-04) when the short whistle sounded.

The second half turned out to be a completely different story as James Horan introduced Eoin O’Donoghue, Eoghan McLaughlin and Tommy Conroy, switched four-time All Star defender Keith Higgins to centre-forward, and got Aidan O’Shea to spend more time closer to the Kerry goal.

Mayo’s comeback got up and running with four unanswered points from Diarmuid O’Connor (2 frees), Ryan O’Donoghue and Eoghan McLaughlin, although the loss of impressive full-back Oisin Mullin to a black card did come at a crucial time.

Kerry responded with scores from Sean O’Shea and David Clifford to check Mayo’s momentum and open up a five point gap again, but the Westerners continued to take the game to last year’s beaten All-Ireland finalists.

They were rewarded in the 53rd minute when impact sub’ Eoghan McLaughlin managed to intercept a pass from Kerry goalkeeper Shane Ryan before exchanging passes with Aidan O’Shea and arrowing the ball brilliantly into the Kerry net.

That goal set up a grandstand finish with the sides trading points four times in the last fifteen minutes as play ebbed and flowed.

A long-range effort from Kevin McLoughlin four minutes into additional time then left just a kick of the ball between the sides, and there was still time for Mayo to engineer an opportunity of an equaliser.

However, Keith Higgins saw his last-gasp effort float across the face of goal and wide.

This latest victory for Peter Keane’s charges keeps them at the business end of the table and in contention for a place in their second successive League Final.

It also sets them up nicely for their trip to Monaghan in two weeks’ time.

Mayo must now and regroup for their visit to Salthill to take on high-flying Galway in a Connacht derby on Sunday week next, with their survival in the top-flight still hanging in the balance.