Kerry are into the Munster U-20 Football Championship Final after a 0-14 to 0-07 win over Limerick at Mick Neville Park in Rathkeale.

Classy performances from Paul Walsh and Killian Falvey in the Kingdom half-forward line proved to be the difference between the two sides.

Limerick can be proud of the effort they put in, but were unable to get the goal they badly needed to get back into the game in the second half.

Kerry bossed the game in the early stages and took the lead inside a minute when Falvey sent over the first of three points.

Ruadhrí Ó Beaglaoich doubled Kerry's advantage three minutes later when he finished off a fine team move with a curling effort off his right foot. 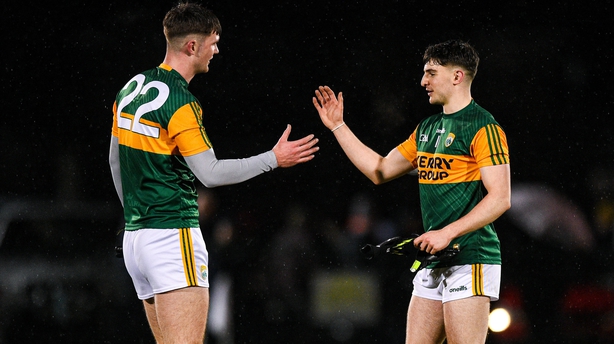 At that stage it looked like it was going to be a long night for Limerick, but James Cummins did well to fist a point on nine minutes to get their opening score.

Kerry were finding their scores coming that bit easier than their hosts, however, and another excellent Falvey shot restored the two-point advantage for John Sugrue's men a minute later.

Walsh’s first free of the half made that lead three soon after.

Limerick had their chances in the opening half, but a mixture of poor shooting and good Kerry defending saw them notch seven wides with 27 minutes on the clock.

The home side did land two excellent points through James Molyneaux and Eoin O’Mahony to bring the gap back to one heading towards half time, but Luka Brosnan and Walsh saw Kerry 0-06 to 0-03 clear at the break.

Patrick Darcy for Kerry and John Hayes for Limerick swapped points in the opening stages when the game restarted, but Walsh and Falvey saw the Kingdom stretch their lead to four six minutes into the half.

Limerick had what looked to be a clear point from Hayes then not given and Kerry took advantage with Paul O’Shea landing a superb effort to give them a 0-10 to 0-04 advantage.

Kerry shut up shop after that with O’Shea landing another beauty that helped them to a seven-point win and a date with Cork, who beat Clare, in the final.

Limerick grind down Clare as Kerry beat Cork, in hurling