Limerick maintained their 100% record in the Allianz Football League Division 4 with a 5-10 to 1-14 victory over Wicklow at Mick Neville Park in Rathkeale.

Billy Lee's charges blitzed their visitors with three goals in nine first half minutes to take control and never looked back. They have now won four games from four and top the division.

Michael Donovan, Danny Neville and Robert Childs all hit the target, while Iain Corbett and Seamus O’Carroll raised green flags in the second half. Gearoid Murphy got a consolation goal for Wicklow late on.

Limerick led 0-04 to 0-02 when Donovan found himself in acres of space and he fired a shot past Mark Jackson for the opening goal on 11 minutes.

Points from Padraig Scanlon and Adrian Enright followed for Limerick with Rory Finn scoring for Wicklow in between.

Things got even better for Limerick on 18 minutes when Padraig de Brun caught Wicklow unawares with a quick free to Tommie Childs. The powerful midfielder then found Neville and he sidestepped his marker to slide the ball into the net.

Limerick had a third goal 60 seconds later after another slick move saw Robert Childs clear on goal and he made no mistake to give his side a 3-6 to 0-4 advantage.

Wicklow settled thanks to two Seanie Furlong frees and a long range placed ball from Jackson, but Limerick went in 3-8 to 0-7 ahead at the break through Enright and the dangerous Hugh Bourke.

Wicklow's hopes of an unlikely comeback were dashed three minutes into the second half after good work from Tommy Griffin set Corbett clear of the away defence. The Newcastle West clubman duly fired in Limerick’s fourth goal past Jackson.

However, they were unable to the goals they needed to fight their way back into the game and Limerick finished the game with a flourish.

Excellent work from Bourke saw him create a fifth goal courtesy of Seamus O’Carroll on 67 minutes before Murphy’s consolation for Wicklow.

Paul Galvin's Wexford side are second in the table after a comprehensive win over London at Chadwick's Wexford Park.

The hosts had scored 2-06 before the Exiles even managed a point as Eoghan Nolan and Mark Rossiter scored first-quarter goals.

Wexford led 2-11 to 0-02 at the break and added further goals from Rossiter and Glen Malone, Liam Gavaghan netting a consolation for London in time added on. 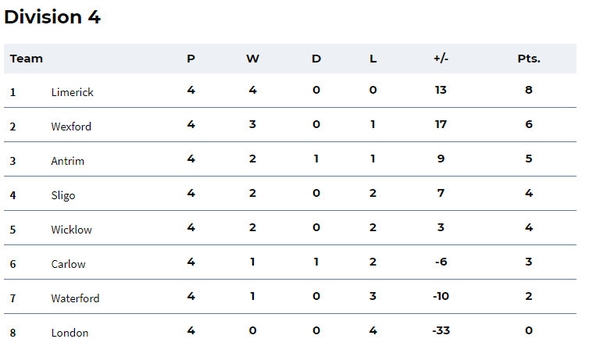 Antrim scored the last three points of the game to secure a draw against Carlow in Glenavey.

They looked poised for a second win of the campaign but a late rally by the Saffrons was finished by a free from Odhran Eastwoodenough.

The point keeps Antrim in the promotion mix but severely damages Carlow's prospects.

Kerry book final date with Cork after win in Limerick

Limerick grind down Clare as Kerry beat Cork, in hurling