By Dan Bannon at Owenbeg

Derry have picked up their second win in Division 3 of the Allianz Football League over winless Louth at sun-kissed Celtic Park.

While Derry welcome the kind of form that could see them push for promotion, relegation looks ominous for Louth, who are now rooted to the bottom of the table with no points.

Derry full forward Shane McGuigan was the games most complete player. Playing at a level that dispels his counties division and displaying exactly why he is the divisions top marksman.

The Oak Leafers fresh from the weeks break, continued where they left off a fortnight previously, storming into an early lead through Benny Heron and the aforementioned McGuigan.

The inside duo combined for 1-04 in a remarkable seven minute spell. Both Heron and McGuigan landed a brace of points a piece and McGuigan added the goal, palmed to the net, after he was excellently set up by the other corner man, Niall Toner.

Despite a midweek appeal, Louth's top scorer Sam Mulroy was still suspended after he was sent off in last weekends loss to Offaly.

Amidst seven changes in total, the visitors welcomed back Declan Byrne and Ryan Burns into the starting fifteen. The two forwards more than made up for Mulroy’s loss, to rattle off an unanswered 1-3 to dramatically bring the sides level, 1-04 each.

Byrne’s long range free taking, from his hands, was exceptional and galvanised his return to the Louth side with a goal which wouldn’t have looked out of place in the neighbouring Brandywell.

Burns pressurised the Derry goalkeeper Odhrán Lynch and crossed the dropped ball along the deck for Byrne to apply the finish. It was no more than Wayne Kierans side deserved in a terrific response to a dreadful start.

The game then settled into a more cautious nature and the scoring rate dramatically dropped. McGuigan sandwiched a long range Bevan Duffy score to give the hosts a one point lead at the break 1-6 to 1-5.

Louth took the lead for the first time in the game on the 40th minute. Burns clipping over two free’s to give the Wee County the perfect start to the half.

Rory Gallagher’s men laboured in their own defence at times and for long parts were unable to break out of it. Louth failed to capitalise and McGuigan levelled with Derry’s first score after a quarter of an hour without a score.

Wingback Shea Downey charged up the field on a rare occasion to then push Derry into pole position with a wind assisted score.

Despite a Padraig McGrogan black card, Derry saw out the game with a supreme composure. McGuigan first, with a patiently worked score before replacement Loughlin added the gloss with a goal. 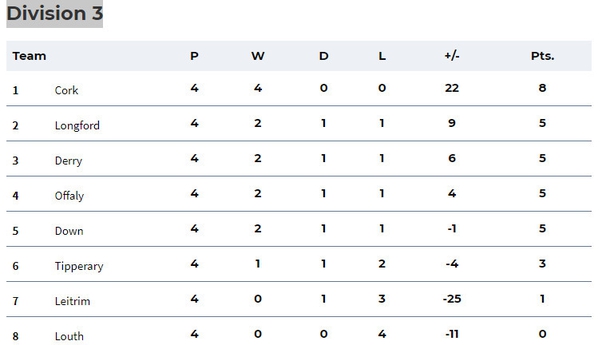 Elsewhere in the third tier, Offaly defeated Leitrim 2-16 to 0-14 in Carrick-on-Shannon.  Ruairi McNamee and Cathal Mangan bagged second-half goals for the Faithful County who are now very much in the promotion mix.

They, along with Longford, Derry and Down, are on five points in second spot in the table.