By Eoin Brennan at Ennis

Laois clung on for what could yet prove a valuable away victory after holding off resurgent hosts Clare by the minimum in Ennis this afternoon.

Eight points clear by the half hour mark, nothing but a handsome victory for Mike Quirke's side appeared on the cards.

However, while they still held a six-point cushion by the break, Laois never reached the heights of that surge on the turnaround and were incrementally reeled in by a defiant Banner.

Despite a 24-minute barren period, Laois could rely, as ever, on Ross Munnelly to get them back on track with a brace of points entering the final ten minutes at 1-11 to 0-09.

Clare stubbornly refused to yield though and following a Cathal O'Connor reply, captain Eoin Cleary earned a 65th-minute penalty that David Tubridy coolly dispatched to the top-right corner of the net, slashing the arrears to just one.

Laois goalkeeper Niall Corbet and Cleary traded placed balls in an anxious finale but Clare passed up two glorious opportunities to share the spoils as their wide count of 12 proved costly in the end. 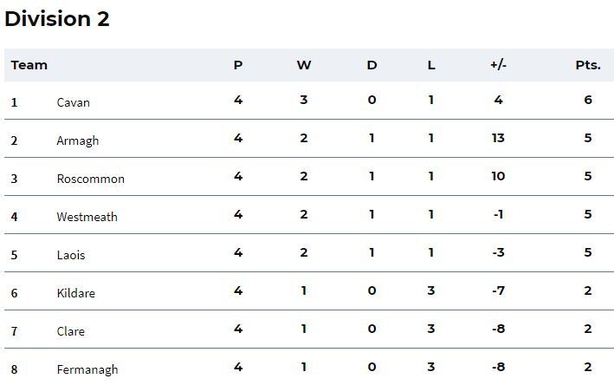 It was all so different in the opening period when wind-assisted Laois set the early pace, predominantly through a three-point burst from Evan O'Carroll to move 0-5 to 0-2 clear by the turn of the first quarter.

The decisive score arrived in the 21st minute when Damien O'Connor's teasing delivery over the top of the home defence was collected by O'Carroll, whose shot was smothered by advancing goalkeeper Stephen Ryan before a slice of fortune helped Colm Murphy's rebound to trickle over the line.

Buoyed by that score, Murphy, the lively Eoin Lowry and Munnelly stretched the gap to eight by the 29th minute at 1-8 to 0-3. So while Eoin Cleary and David Tubridy did lessen the damage by the break, Clare required a big improvement for the remainder.

Experienced duo Cleary and Tubridy continued the Banner backlash on the restart but again poor shooting disrupted their momentum at 1-9 to 0-9.

Laois almost made the game safe when Sean Byrne raced through but his powerful effort crashed off the underside of the crossbar and instead it was Clare that eventually took full advantage with Tubridy's rousing goal.

Crucially, Laois never allowed the home side to pull level as they dug deep to record their second victory of an inch-tight Division 2 and leave their opponents in the danger zone.