Thirteen seasons into her Kerry senior career, Louise Ní Mhuircheartaigh continues to be one of the most dangerous forwards around, but the Ballyferriter native is far from content and still has a long list of ambitions in the game.

Her primary objective is to lead Kerry to victory tomorrow when they host Tyrone in their fourth Lidl National Football League outing of the season, and if this one goes like the first three, Kerry will be well on the road to a second Division 2 final in a row.

Their unbeaten start to 2020 has seen Ní Mhuircheartaigh score 5-07 of her side's tally as wins against Cavan, Wexford and Armagh means they lead the chasing pack.

However, after two years in the second tier she feels it’s time for the 2017 Munster senior champions to graduate again.

Tomorrow’s game in Fitzgerald Stadium (11am) is the opening act of an attractive double header with the Kerry and Meath men’s teams, and 28-year-old Ní Mhuircheartaigh says they are keen to impress.

"We started back this year with new management and it has been very fresh and positive since. Getting a good start to the league was the aim and having three wins from three is just fantastic. We are hoping to build on that now," said the Corca Dhuibhne star.

"We have had a lot of girls making their debuts in the last few weekends, which is a real bonus. There has been a lot change this year with Darragh (Long) and Declan (Quill) coming in. A few experienced players finished up but the young players are fighting hard and there is a great buzz there again.

"It’s always special when you play in Fitzgerald Stadium, and playing before a Kerry men’s game as well is great. We have a task on our hands and we can’t let the big occasions get to our heads too much. The crowd will gather as the game goes on but you don’t notice that. Hopefully we can put on a great show for everyone, perform well and come away with the points." 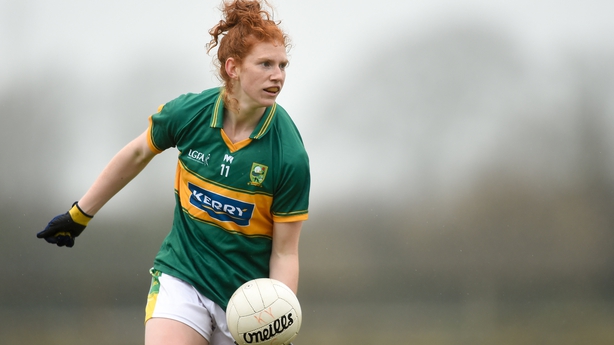 As her surname suggests, Ní Mhuircheartaigh is a native Irish speaker. She was born in the Kerry Gaeltacht on the Corca Dhuibhne peninsula, and although she went to school in Dingle, she is quick to correct the record as to her heritage. "Dingle are the rivals; I’m from the Gaeltacht – Ard na Caithne, Ballyferriter," she says.

The Irish language remains the cornerstone of her life. Irish continues to be the spoken language at home, and was the only language spoken in her early years. Consequently, she decided to pass the love of her native tongue on to the next generation and has worked as an Irish and PE teacher at Mercy Mounthawk in Tralee for the last five years.

"We had Irish all the time growing up. It was in primary school that myself and my brother learned English. We had no English at all until we were about five. That’s our life. You come home at the weekend and it’s all Irish we speak around the place.

"People are always asking if I think in Irish and I do – they find that fascinating. It was our first language, so that’s what you think of."

During her time studying in UCC, where she won an O’Connor Cup in 2012, she was tagged as 'the Female Gooch’ and she still dissects footage of the Killarney man in an attempt to gain an edge on her rivals.

"The Gooch is something else, he’s in a different category than everyone else. I’ve looked up to him for years and I still watch videos of him on YouTube. The girls in UCC started that name, but if you thought too much about the weight of carrying it you’d be a nervous wreck."

Ní Mhuircheartaigh made her debut against Laois in 2008 as a 16-year-old, having been named Munster's Young Player of the Year a year earlier.

"I had been training with Kerry for a while, but I got my chance in 2008 and I’ve loved every minute of it. I’ve played every year, with the odd break for injuries, but I’ve been involved consistently. I wouldn’t change anything."

From the off she made an impact in the Kerry full-forward line, regularly top scoring for the Kingdom, eventually winning her first Munster title in 2013. That year also saw her pick up a second All Star award, while Munster medals followed again in 2015 and ’17.

That 2013 win halted Cork’s run of nine provincial titles in a row, which was some revenge for defeat in the previous year’s All-Ireland final, but in the last three years it has been eventual champions Dublin that have haunted their summers.

"You have to be planning for the summer but for now all focus is on Sunday and playing Tyrone.

"There is a massive drive to get promotion, that’s one of our aims this season. Division 2 is a very hard league to come out of, everyone has the same goal so it will be tough to get over the line."