Roscommon resurrected their Allianz League Division 2 campaign with a comfortable seven-point victory against Clare, as the unpredictable nature of the second tier continued into week 3.

The hosts, who were bottom of the table on Sunday morning, kept Clare scoreless for 45 minutes in a scrappy game ruined by Storm Ciara. Roscommon played with the elements at their backs for the opening half but a six-point interval lead wasn't convincing, given the strength of the breeze.

But the Connacht champions, led by Enda Smith and Brian Stack, were far more assured after the break, and substitute Noel Gately goaled deep into injury-time to seal the deal.

Anthony Cunningham’s side were in a precarious position when they lost the influential Niall Daly to two yellow cards in quick succession after 23 minutes.

But they coped without the Padraig Pearses defender’s absence, and Clare, who lost midfielder Ciarán Russell to a straight red card in injury-time after he had been earlier shown a black card, never looked like mounting a comeback.

Clare owned possession in the early stages but it was Roscommon who got the scoreboard moving with their first two attacks. Richard Hughes and David Murray set up Stack for the opening score before Cathal Cregg used the wind effectively to split the posts from 40 metres.

A foul on Hubert Darcy presented Cian McKeon with the chance to open his account from a free in the tenth minute, and the Boyle player duly obliged.

A rare Clare foray behind enemy lines resulted in a match-defining moment when Roscommon goalkeeper Colm Lavin did brilliantly to intercept a pass from Ciarán Russell, which was destined for the unmarked Keelan Sexton in the 15th minute. 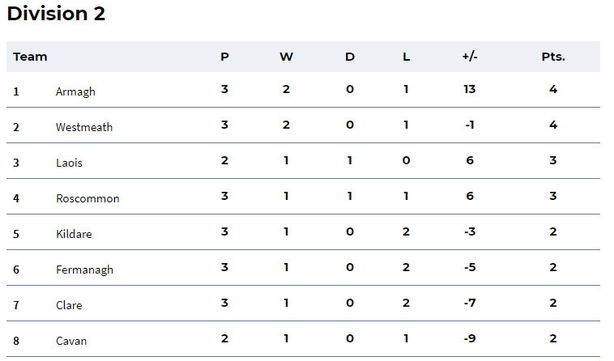 A Clare goal at that stage would have hauled them back into contention but manager Colm Collins would have been happy with the way his team were frustrating the Roscommon forwards, denying them the space to build up a potential match-winning tally.

Ciarán Lennon, McKeon (a free) and Cregg did manage to find the range for the Rossies but a 0-06 to 0-00 half-time lead didn’t look convincing from their perspective.

Yet, with their league hopes on the line, Roscommon’s game management was excellent in the second half. Eddie Nolan, introduced at the break, helped Smith gain a foothold around the middle, and suddenly Roscommon were in charge of the possession stakes.

David Tubridy finally opened Clare’s account from a long-range free but they still struggled to gain any foothold in the contest.

Their remaining three points came in second-half injury time through Tubridy and Eoin Cleary from frees, and a fisted effort from substitute Jack Morrissey.

Enda Smith pointed on the run with three minutes remaining before Gately bundled the ball into the empty net, after Lennon had been denied, to confirm his side’s victory.