A remarkable finale at Croke Park ended with defender David Byrne emerging as the unlikely saviour of Dublin with an 80th minute equaliser in an Allianz football league Division 1 thriller.

Trailing by nine points with an hour on the clock - and by 10 late in the first-half - the five-in-a-row All-Ireland champions looked in real danger of slipping to their first Division 1 defeat under Dessie Farrell.

But buoyed by the impact of subs Sean Bugler, 70th minute goalscorer Kevin McManamon and Colm Basquel, the hosts outscored Monaghan by 1-07 to 0-01 from the 60th minute onwards to secure the stalemate.

It was a disappointing ending for Monaghan who looked set for their third consecutive league win over Dublin having been inspired earlier in the evening by Conor McManus, who kicked 1-04, and goalkeeper Rory Beggan, who hit 0-03.

McManus grabbed his goal after just 43 seconds after latching onto a long diagonal ball in from Ryan McAnespie, skipping away from Michael Fitzsimons and slipping a low scuffed shot beneath Evan Comerford in the Dublin goal.

Dean Rock responded with a converted free for Dublin in the fourth minute but the 2018 league champions didn't score again until the 23rd minute, an 18 minute spell in which everything went wrong for the hosts.

Monaghan racked up seven points in a row during that period, McAnespie and Micheal Bannigan, a recent Sigerson Cup winner with DCU, helping themselves to a brace of scores each.

The St Brigid's man pulled up when in possession out on the right wing beneath the Hogan Stand and immediately left the pitch, knowing his evening was over.

Dan O'Brien, starting his second game in a row for the Dubs, broke the chain of Monaghan scores with his team's first from play in the 23rd minute. 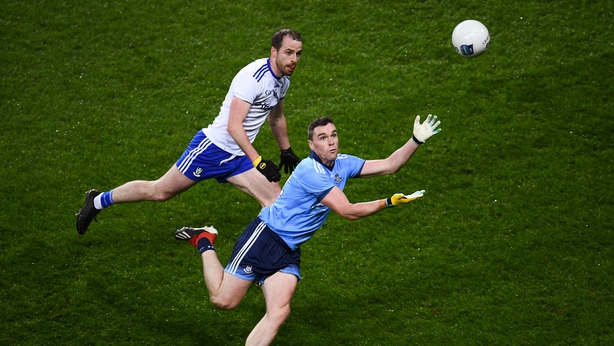 It was a fine score from a central position about 30 metres out but it was also a rare moment of inspiration as Dublin struggled in front of the posts, dropping three efforts into goalkeeper Beggan's arms in the first-half.

Beggan, who played an exciting sweeper 'keeper role, nailed a long-range free in the 28th minute and Conor McCarthy dropped a left footed effort just over on the half hour mark to leave a whopping 10 points between the teams.

A Rock point just before the interval left Dublin nine points behind, 1-09 to 0-03 down, and badly in need of inspiration.

Paul Mannion came on for Dublin at half-time though he and Monaghan corner-back Kieran Duffy were immediately booked. Monaghan were down to 14 for the opening minutes of the third quarter following Darren Hughes' black card sin-binning late in the first-half for apparent dissent.

Dublin enjoyed a strong restart with points from Rock and Ciaran Kilkenny though Monaghan were settled by points in response from Beggan and McManus from placed balls.

The Ulster outfit retained a nine point lead with 10 minutes of normal time remaining but just couldn't hold on as Dublin set to work on reeling them in, outscoring Monaghan by 1-07 to 0-01 from the 60th minute.

Dublin's late rally earned them a point against a Monaghan side that had dominated the first half and looked to be hanging on deep into added time!

But it was this Kevin McManamon goal on 69 minutes that proved crucial for the Dubs #DUBvMON #RTEGAA pic.twitter.com/1O6MrSH1IR

Substitutes yielded 1-04 for Dublin including McManamon's 70th minute goal when he blasted in after Bugler's clever flick on into space.

Bugler then kicked back to back points and with just one in it at the death, Byrne emerged as Dublin's hero with that last gasp leveller of his left foot.