A clinical display in front of goal for Dublin saw them get their Allianz League campaign up and running with a 4-18 to 2-17 defeat of Laois in Parnell Park this afternoon.

Both sides suffered heavy opening round defeats last weekend with Laois going down to an eleven point loss to current Leinster Champions Wexford, while twelve points the difference in the end between Dublin and Kilkenny.

It was Mattie Kenny's side who got off to a blistering start scoring 1-04 without reply inside the opening ten minutes.

A trio of scores from the reliable Oisin O’Rorke got Dublin out of the blocks before the Kilmacud Crokes attacker turned provider for Eamonn Dillon, playing a sublime cross field ball from the stand side straight to Dillon unmarked at the back of the box.

Dillon took his time luring Enda Rowland closer before burying the ball into the back of the net.

With a seven point lead after just ten minutes and after a blistering start from Kenny’s side, Dublin began to relax a bit with Laois more than happy to capitalize with any chance that came their way.

Three scores without reply through Ciaran McEvoy, Aaron Dunphy and Ross King saw them reduce the deficit to four in a matter of minutes with the visitors really starting to find their groove.

The momentum was quickly turning the way of Laois and Dublin received a further first-half blow when goal scorer Eamonn Dillon limped off with what looked like a hamstring injury to be replaced by the able David Keogh.

Laois then managed the score of the day, with corner forward Stephen Bergin scoring from distance, before James Ryan clawed back the early deficit to just two points. 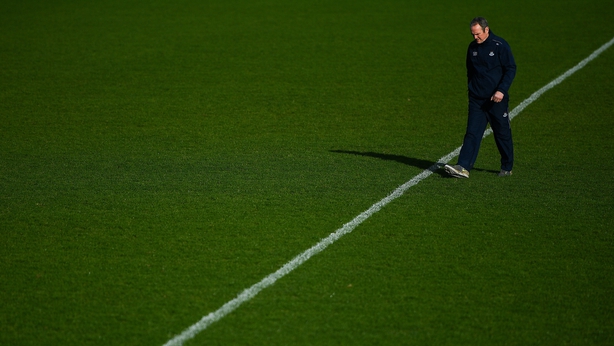 A fine effort from distance from full forward Willie Dunphy, either side of long range points from Jack Kelly and Paddy Purcell, saw Laois take the lead for the first time in the game.

Dublin responded well after conceding the goal with two more Oisin O’Rorke points edging them in front again before Mark Schutte’s afternoon was ended prematurely with injury; the Cuala man replaced by John Hetherton on the half hour mark.

A trademark Rowland effort from distance leveled proceedings once more at 1-08 apiece before a purple patch for Dublin minutes before half time saw them lead by three at the break.

Dublin’s start to the second-half was a carbon copy of their start to the first with Rowland’s net being rattled twice in the space of the opening five minutes to give Kenny’s side some breathing space for the first time all afternoon.

The goals came from O’Rorke and Keogh with Rowland beaten twice in a matter of minutes from close range to put seven points between the sides for the second time during the game.

Rathdowney man Ross King’s accuracy from free’s kept Laois in contention but realistically it was goals they needed and not points.

Dublin put the game to bed midway through the second half with their fourth goal of the afternoon coming through Ronan Hayes.

Hayes plucked the ball out of the sky before turning on the spot and unleashing an unstoppable effort past Rowland to leave Laois downtrodden knowing the game was now beyond reach with time against them.

Both sides exchanged points in the closing stages before Willie Dunphy got his second goal of the game, although it amounted to a consolation at that stage.