Cork recorded their second win in as many games in their quest to make an immediate return to Division Two football when they recorded a double scores in Avantcard Pairc Sean MacDiarmada.

After their encouraging performance in Derry last weekend that saw them record an impressive draw, there was a large Leitrim contingent in the Carrick-on-Shannon venue hoping the home side could replicate that form.

Last week's hero, Keith Beirne, opened the scoring for Leitrim after the Rebels had seen a number of early chances come to nothing.

Cork’s reply was swift with the impressive Ciarán Sheehan scoring his and Cork’s first of the afternoon after eight minutes of action.

Cathail O’Malley then got in on the scoring act with two points in as many minutes. One a deadly accurate free, the other a fine effort from play.

Beirne reduced the arrears to a solitary point when he pointed in the 15th minute and a minute later it almost got considerably better from a Leitrim point of view.

Paddy Maguire broke clear from defence and set Leitrim on the attack. Beirne then released Darragh Rooney but the Melvin Gaels forward was denied by a wonderful save from Cork net-minder Micheal Martin.

Points from O’Malley and John O’Rourke extended the Cork lead to three and although Leitrim replied with a pointed free from Beirne, the visitors were beginning to impose themselves more and more on the contest.

The final five minutes of the half saw Cork, with the wind at their backs, carve the Leitrim defence open on a number of occasions, with Leitrim thankful to their goalkeeper Diarmuid McKiernan the game wasn’t over as a contest by the interval.

McKiernan had already made a wonderful save to deny O’Malley midway through the half and that was followed by an outstanding stop to deny Brian Hartnett with five minutes of the half remaining.

Former AFL player Sheehan extended the lead to three points with a point from play and in the first minute of injury time the visitors took a huge step towards registering their second win of the league campaign when they struck for the game’s opening goal.

Ruairi Deane released Sheehan who finished clinically after Leitrim were punished for a sloppy turnover.

The first-half scoring was completed when Thomas Clancy scored from 40 metres to give the visitors a commanding 1-7 to 0-3 lead at the break.

Beirne opened the second-half scoring with a pointed free, but Cork soon hit back with a wonderful score from substitute Luke Connolly and a fine effort from Tadhg Corkery.

A black card for Luke Connolly failed to offer Leitrim an opportunity to claw their way back into the contest with two further Beirne points making little impact on the scoreboard.

Points from Cork’s Paul Kerrigan and Sean White were matched by Leitrim points scored by Evan Sweeney and another Beirne free.

It proved to be an eventful afternoon for Connolly who was sprung for the bench during the opening half at a time when Cork weren’t having it all their own way. Having been black carded early in the second half, he was to finish the game impressively, scoring four points in the closing stages, two frees, one mark and one from play.

Leitrim did have the final say when Ray Mulvey scored a late point but it proved to be no more than a consolation effort as Cork claimed a deserved victory. 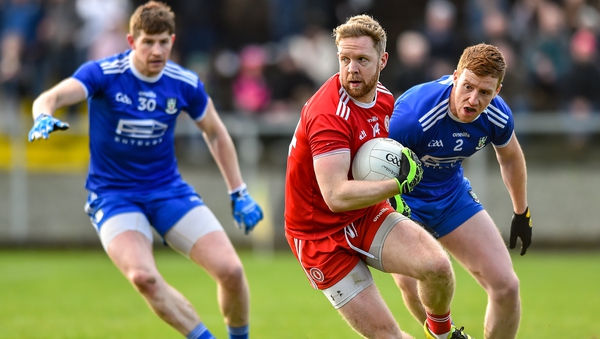