It wasn't particularly pretty from Kerry but 133 days on from their All-Ireland final replay defeat to Dublin, the result was all that mattered at Croke Park.

The Kingdom didn't quite get the win, despite leading by three points in the 66th minute, but in the circumstances a gritty draw, thanks to new captain David Clifford's 80th minute equaliser from a free, will have felt almost as good.

Dublin, who lost Eric Lowndes to a 56th minute red card, had turned that three-point deficit into a one-point lead and looked set to heap more misery on Kerry.

But when Micheal Burns was fouled in virtually the last play of the game, and with regular free-taker Sean O'Shea dismissed in the 77th minute for a black card on top of an earlier yellow, up stepped Clifford to deny the five-in-a-row All-Ireland champions.

Clifford's curling kick from around 35 metres out brought the sides level for the eighth and final time of an absorbing game that wasn't easy on the eye but was always fascinating as two great rivals engaged.

Tense scenes as tempers flared more than once in the final stages at Croke Park!

But David Clifford kept his cool to earn Kerry a draw at the death #RTEGAA #AllianzLeagues pic.twitter.com/3d92mBBO1Y

Both camps will take plenty from the result with new Dublin manager Dessie Farrell watching his team battle back from the brink of defeat while a young and hungry Kerry made a clear statement that they're going nowhere.

Clifford finished with 1-03 while Dean Rock top-scored overall with 1-06 on an evening when former U-21 Player of the Year Aaron Byrne came on along with Dan O'Brien for the hosts.

Tommy Walsh was named at midfield for Kerry but the number eight immediately moved to the full-forward line. O'Shea moved in the opposition direction to midfield in a curious move by the Kerry management.

It suggested a more route one approach to take advantage of Walsh's aerial ability and the new advanced mark rule but the towering Tralee man didn't claim a single mark.

With both teams naming strong sides - Dublin had nine of their All-Ireland winning 15 on board, while Kerry started with 11 of the team that lined out last September - the old rivals picked up where they left off.

It was hard hitting, absorbing fare for the most part in front of an intrigued audience of 42,502 with Dublin initially running up a 0-05 to 0-01 lead before being reeled in by a Kerry side with a venomous attack.

Clifford was at his very best and it was his expertly taken 18th minute goal that levelled the game up for the first time at 1-02 to 0-05.

David Clifford's goal was a thing of beauty!

The back to back All-Star had plenty to do when he picked up possession just inside 45 metres from goal on the left but raced away from Lowndes firstly before evading Eoin Murchan to get a low shot away that beat Evan Comerford.

Goalkeeper Comerford was standing in for injured captain Stephen Cluxton - James McCarthy stood in as captain - and was happy to avoid injury ahead of Wednesday's Sigerson Cup final outing with DCU.

The teams were level three more times in the half with Dublin taking a slender 1-10 to 1-09 advantage at the interval.

Fenton, marked by O'Shea, was excellent in the opening half and scored four points from play while Conor McHugh won the only advanced mark of the half for Dublin, successfully converting it.

The first ball aimed at Walsh ended up going out for a goal kick and the supply line in to the former Aussie Rules player was limited thereafter though he did use his height to win a throw-up in first-half stoppage time that drew a free which Clifford converted.

Niall Scully won a 38th minute advanced mark for Dublin and began a move that ended with Ciaran Kilkenny having a shot at goal that was saved by Shane Ryan.

Kerry were more efficient at the other end and back to back points from Paul Murphy allied to a score from substitute Liam Kearney, an All-Ireland minor winner in 2014, moved them two ahead for the first time, 1-12 to 1-10. 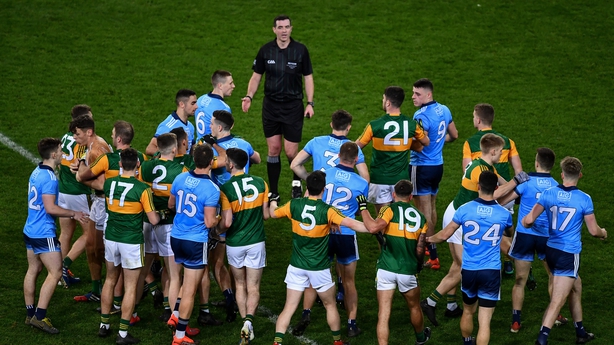 Dublin were reduced to 14 in the 56th minute when Lowndes, who was only back on the pitch a matter of minutes after a black card sin-binning, was booked for a challenge on Stephen O'Brien and subsequently red carded.

O'Shea pointed the resulting free to leave Kerry two clear again at 1-14 to 1-12 and the margin was out to three with 10 minutes left when O'Shea converted again.

Kerry lost sub Graham O'Sullivan to a 62nd minute sin-binning so played the majority of the closing minutes with 14 men and then lost O'Shea at the death.

Dublin did what Dublin do and reeled in the Kingdom with points from Byrne, Kilkenny and Scully and moved one ahead when Rock pointed a 77th minute free but they just couldn't hold on as parity prevailed.