Wexford got their Allianz Hurling League season off to a winning start in MW Hire O'Moore Park this evening when they got the better of a battling Laois side.

Laois were one of the stories of the 2019 season and they can get used to high-profile opposition in Division 1 of the league and in the Leinster championship this year.

And despite starting with only seven of the players that featured in that All-Ireland quarter-final loss to Tipperary (while Wexford had 12 of their team beaten by Tipp in the semi-final), Laois gave it a right good go in the first half. 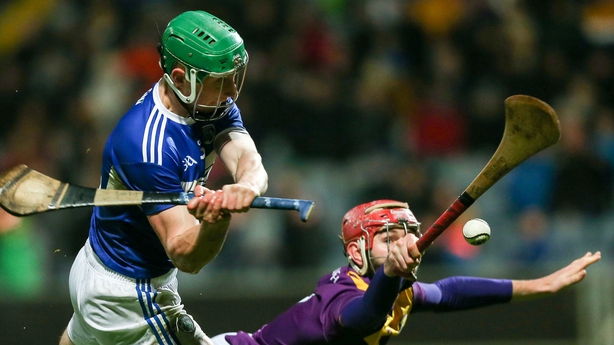 Playing with a strong wind, Enda Rowland’s monstrous puckouts were an attacking weapon for Laois. On one occasion he landed one in the Wexford square; a couple of times he linked up brilliantly with Ross King in the full-forward line. For good measure he even pointed a whopper of a free from just outside his own ’21.

Laois struck for a goal in the 15th minute when the ever hard-working Willie Dunphy finished past Mark Fanning after great work from his Stephen Bergin.

The free-taking of Jack O’Connor kept Wexford moving for most of the half but Laois nudged two points clear in the 32nd minute following another King free and a fine point from play.

But Wexford, who had been error-ridden throughout the first-half, struck for two goals in injury time, the first from Conor McDonald after he got inside Ryan Mullaney and the second from Aidan Nolan.

The last act of the half though went to Rowland, who played a one-two with Mullaney from a puckout and walloped it downfield. Mark Fanning fumbled it and ended up in the net. At half time, Wexford led 2-10 to 2-8 after 35 very entertaining minutes.

Wexford had the wind in the second half and though Laois continued to compete very well, slowly Davy Fitzgerald’s men pulled clear with the Foleys, the O’Connors, Conor McDonald, Cathal Dunbar and Paul Morris finding the range.

In the end Wexford had 11 points to spare. The final score was a bit harsh on Laois but such is life at hurling’s top table.

Laois travel to Dublin next weekend while Wexford are at home to Clare.