Cork opened their Allianz FL Division 3 campaign with what was ultimately a comfortable 0-20 to 0-13 win against Offaly at Páirc Uí Chaoimh.

However, it wasn't until the second half that Ronan McCarthy’s Rebels got on top, having trailed for much of the first period, going in 0-09 to 0-08 behind at half-time. Nine of their 11 second-half points came from players introduced as substitutes, with Michael Hurley getting five of those after being brought on at half-time.

The hosts had the first four points after the restart to take control of the game and pushed on to record their first victory at the new stadium, having lost five matches there across 2018 and 2019. It was also Cork’s first win in the opening round of the league since 2016.

Before a crowd of 2,356, they were certainly tested in the opening half by a dogged Offaly side that pieced together an unanswered run of six points between the 12th and 23rd minutes, after Cork had established an early 0-03 to 0-01 lead.

Anton Sullivan, Ruairí McNamee and Cian Johnson put them ahead as Cork struggled to make inroads in attack and then, when the hosts’ Seán White set up captain Ian Maguire for a goal chance, Paddy Dunican saved well. 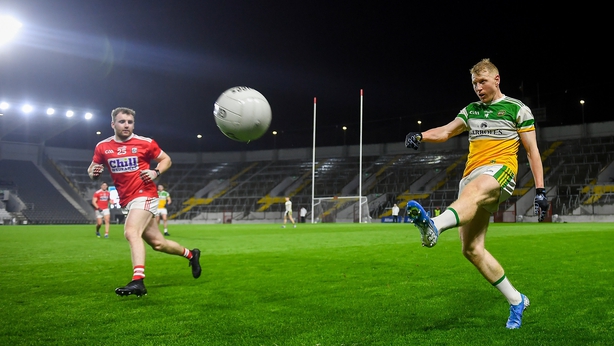 Offaly built on that with three in a row from Bernard Allen to lead by 0-07 to 0-03 but Cork improved for the remainder of the half, with Ciarán Sheehan and White closing the gap.

While Sullivan’s third point of the night put Offaly 0-09 to 0-07 ahead three minutes before the break, they lost Allen to a black card in injury time and debutant Cathail O’Mahony’s free meant that Cork went in just a point behind.

They made the most of their numerical advantage on the restart as Hurley had an immediate impact while another debutant, Brian Hartnett, and Kevin Crowley also had points, the latter’s goal attempt whizzing off the crossbar and over.

Allen marked his return with a free, Offaly’s first point in 19 minutes and first from a dead ball, but Cork had the momentum and they pushed four clear thanks to two from Hurley, the second of those after Maguire had again been denied by Dunican.

At the other end, Offaly might have fashioned a way back into the game as Ruairí McNamee had two goal chances in quick succession but Micheál Martin kept both out and Cork eased clear in the closing stages.

Subs John O’Rourke, Colm O’Callaghan and Tadhg Corkery all had points as they built their lead and not even the late loss of White to a black card could derail them as they won by seven in the end.