Holders Tyrone won their eighth Dr McKenna Cup title in nine years as they carved out a three points win over Monaghan in an uninspiring decider at the Athletic Grounds.

A defensive contest went for long spells without producing a score, with both sides intent on making themselves difficult to penetrate.

The holders were on their way to a comfortable lead before Barry McBennet's stoppage time goal gave Seamus McEnaney’s side a glimmer of hope, but it came too late to rescue Monaghan, who had Conor McCarthy top-scoring with three points.

The Farney men suffered a blow after just two minutes with the loss of experienced defender Colin Walshe, forced off with an ankle injury, and he looks set to miss the NFL Division One opener away to Galway next weekend.

Mickey Harte's side eased ahead with scores from Burns and centre back Michael O’Neill, with Shane Carey’s opening score for the men in blue and white immediately cancelled out by Daniel Kerr.

Monaghan forced a series of turnovers, but struggled to break down a fortified Tyrone rearguard, with Robbie McAllister and Niall Kearns probing for openings.

Tyrone's counter-attack however is still a work in progress in these early days of 2020, and combination of misplaced and ill-timed deliveries cost them scores.

Conor Boyle forced another terrific turnover to launch the move that Conor McCarthy finished in style, and the Scotstown star swept over a 25th minute effort to bring his side level.

McCurry came off the bench to slot over three scores and create another for Kieran McGeary as the holders opened out a six-point lead. 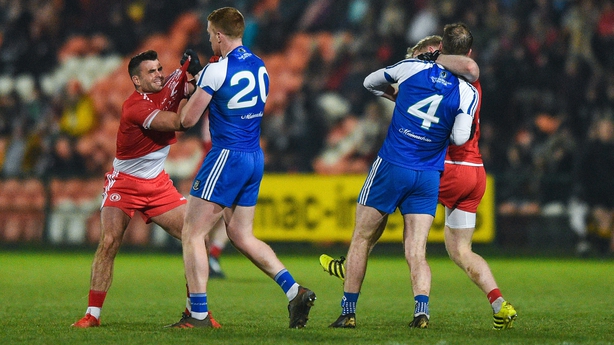 Target man Burns continued to win his battle with Conor Boyle, claiming a hand in a number of scores, including the Ronan O’Neill effort that sent Tyrone in with a 0-8 to 0-3 interval lead.

O’Neill stretched the advantage further, before a much-needed Monaghan score, their first in 26 minutes, came from a Shane Carey free.

And when Karl O’Connell broke tackles to set up a third score for McCarthy, Monaghan looked set to make serious inroads.

But their challenge stalled amidst missed opportunities as Tyrone found a new wave of energy to inject life into a contest that had dipped in intensity as the second half wore on.

They had failed to register a score in the final quarter until midfielder McBennett rolled the ball to the net after Dessie Ward’s effort came back off a post.

But it was too late to halt Tyrone's march and yet another McKenna Cup title.