Just two games into the Padraig Joyce era, Galway are toasting some silverware as they were deservedly were crowned FBD Connacht Senior Football League champions in front of 3,217 spectators at Dr. Hyde Park.

Shane Walsh produced a man of the match display, contributing 1-8 to his team's cause in a masterful performance.

The damage was done either side at half time as the Tribesmen hit 1-7 without reply to wrestle away the early initiative from Roscommon.

The hosts made the brighter start, dominating the possession stakes and generally gaining an edge in attack.

But it took them eight minutes to register their first score, Niall Kilroy fastening himself on to a good move to raise the game’s opening white flag.

The excellent Walsh got Galway back on level terms before Andrew Glennon bisected the posts from 40 metres edge Roscommon back in front. 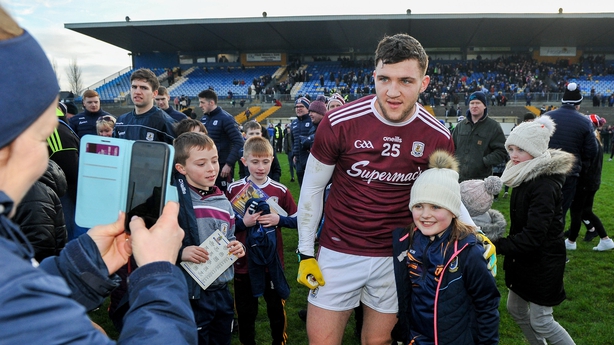 Ciarán Lennon pushed Anthony Cunningham's side further ahead after Galway were overturned in their own half-back line. Michael Boyle pared the margin back to a single point but the Rossies will feel they should have grabbed the opening goal when Richard Hughes’ effort, following an excellent, incisive vote, just shaved the top of the crossbar.

When Donie Smith stretched the margin out to three points with a free from an acute angle, the home side were in a decent position, but soon lost their way as Walsh, Adrian Varley and Robert Finnerty began to exert their influence in the Galway full-forward line.

Two scores from Finnerty were followed by Walsh punishing the Roscommon indiscipline with a hat-trick of frees to leave Galway 0-7 to 0-5 ahead at the break.

Barely 30 seconds into the second half, Walsh won his side a penalty, which he converted with supreme confidence, to firmly put his side in the driving seat.

But, led by Walsh, the Tribesmen kept the scoreboard ticking over, despite losing Eamon Brannigan to a red card after the wing-back missed a simple goal chance.

Full-back Seán Mulkerrins and substitute Paul Conroy also got in on the scoring act to set Galway up nicely ahead of a challenging Division One campaign that commences against Monaghan next weekend.