AFL side Adelaide Crows have confirmed that Cathal McShane will train with the club this month.

It had been expected that McShane would link up with the Brisbane Lions, but in a new twist Crows general manager Justin Reid confirmed on their website that the player would be "joining our pre-season training".

Adelaide are confident that the joint top scorer in last year's All-Ireland championship has the ability to make a mark Down Under, with Reid adding: "He has the physical attributes, coming in at a touch over 190 centimetres. He's also strong in the air and can kick on both feet.

"Once he lands in Adelaide, it’ll provide the opportunity to understand more about our club, our philosophies and what our program looks like." 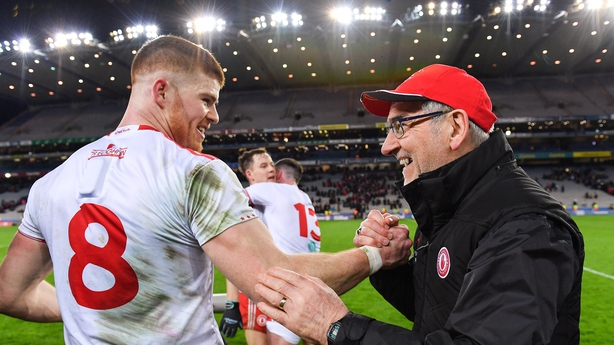 Of course, McShane's move to pastures new will be a big blow for Tyrone and manager Mickey Harte, in an interview with the BBC is "saddened" that former Gaelic footballers are acting as recruiting sergeants for Australian rules football.

"All I can say is he has been wooed by some people in the AFL. He's going out there for a few days to experience what that might be like. There's no final decision made yet as to whether he's going to go or whether he's going to stay with us. But at the moment, he's certainly considering that move.

"I was trying to enlighten him to the fact that there's lots of good things that can happen for him by staying here. And the things that he's going out there to try to do are very much more variable." #

"It used to be in the past that we had unknown Australians try to woo our players out to the AFL league. Now we have ex-Gaelic players doing it, which really saddens me"

The Tyrone boss has long made known his wariness about the GAA's engagement with the AFL, having repeatedly called for the international rules series to be scrapped.

The GAA, in Harte's view, had "warmed the market" for a rival organisation and yesterday he expressed sadness that former Gaelic footballers were now part of the AFL recruiting drive.

"As you would know, I've not been a fan of the engagement we've had with the AFL over many, many years now.

"It used to be in the past that we had unknown Australians try to woo our players out to the AFL league. Now we have ex-Gaelic players doing it, which really saddens me. We've got recruits for the AFL within our own ranks of the GAA and that's sad."