Ballyboden St Enda's stalwart Conal Keaney admitted his side were lucky to come away with a second Leinster club football title after today's two point win over Éire Óg.

The Carlow champions were leading in the closing stages of a hard-fought game, played in very difficult conditions at Portlaoise, after the sides went in level at the break.

Boden were being frustrated, and when Sean Gannon kicked Éire Óg in front with five minutes on the clock, there was a sense that it could be a decisive score, with the rain being blown in by the remnants of Storm Atiyah.

But it was then that the experience of the 2016 All-Ireland champions told, as they notched three quick points to get over the line.

"We'd a huge breeze there in the second-half," Keaney told RTÉ GAA Correspondent Brian Carthy, "and we probably thought we would clip a few scores, and they might die-off a little bit.

"It just didn't happen. With the conditions, the ball was going everywhere. They were tackling really hard.

"We're just really lucky to get away there today." 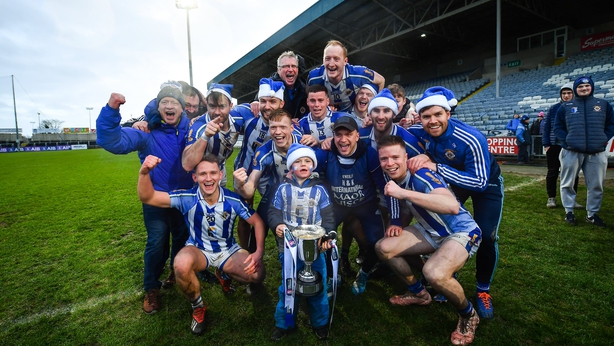 It's a second provincial football title for the evergreen Keaney, who has also won a Leinster inter-county hurling medal with Dublin.

Ballyboden dominated the early stages of the game, but found themselves behind by three points after a kick-out malfunction.

Éire Óg were defending relentlessly, and making scores very difficult to come by, but the Dublin champions were level at the break after Ryan Basquel pointed a close-range free.

"They were really well set-up, and they knew exactly what to do," said Keaney.

"(They) tried to minimise all our attacks, which was difficult to compete with, even in the second-half when we had the bit of a breeze.

"I know they feel a bit aggrieved that they didn't get the draw, or maybe extra-time out of it.

"But look, we'll take it. It doesn't come around too often."

There's a four week gap now to the All-Ireland semi-final against Ulster champions Kilcoo, of Down.

The last four clashes are taking place over a month earlier than previous years as the GAA looks to condense the season.

Keaney, for one, is not a fan of the move, which will also see the final brought forward from its traditional St Patrick's Day berth to the 19th of January.

"Conditions are going to be something similar to that, so do you get great football out of that? No you don't.

"It's just a big battle. I would like to see it (played) when the weather is a bit better, maybe in February like it was before.

"That's what it is. We'll just get on with it, and we'll train over the Christmas, which isn't ideal.