The 35-year old St Oliver Plunketts/Eoghan Ruadh attacker has called it a day after a highly decorated Dublin career in which he amassed seven All-Ireland senior medals and was named Footballer of the Year in 2010.

In his retirement statement released this afternoon, Brogan said it was the "right time to hang up the boots" after "an amazing 15 years on the road".

"My GAA career has always been about the journey, not the destination," he said.

"I have learnt more from the losses than from the wins, more about myself in times of challenge and injury than in times of success.

"To the Dublin supporters and Hill 16, thank you for the unwavering support during my time playing in blue and never giving up on me in a blue jersey. I have always claimed that you are the greatest fans in the world and you were my last wave walking out of Croke Park.

"I gave my all for the cause right to the end and I am happy now to take my place in the stand, back to where it all began for me as a child with my own father - cheering on the Dubs.

"On to the next journey." 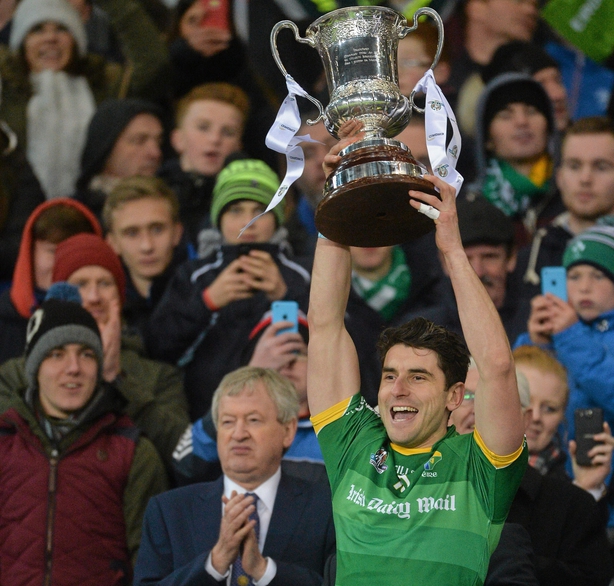 A member of one of Dublin Gaelic football's most illustrious families, Brogan's father Bernard Snr won three All-Ireland titles in the 1970s, while his older brother Alan won three All-Ireland medals alongside him in 2011, 2013 and 2015. Paul was also part of the triumphant panel in 2011.

Brogan made his championship debut for Dublin during the 2007 season, earning an All Star nomination that summer after a string of impressive performances as Paul Caffrey's side claimed a third successive Leinster title.

He firmly established himself as a fixture in the team over the next couple of years and enjoyed an exceptional season in 2010 as the Dubs, under Pat Gilroy, were pipped by eventual All-Ireland champions Cork in agonising circumstances in the All-Ireland semi-final.

Brogan was named Footballer of the Year for his displays in 2010.

The following year, he was a pivotal figure as Dublin, after much huffing and puffing, finally reached the promised land with a dramatic one-point win over Kerry in the 2011 All-Ireland final. It was the capital's first All-Ireland triumph since 1995.

The All-Ireland successes would flow freely afterwards. Following an All-Ireland semi-final defeat to Mayo in 2012, Dublin gained the revenge the following year, beating the westerners 2-12 to 1-14 in the 2013 decider, the first year of Jim Gavin's wildly successful reign.

Brogan was instrumental in the success, palming home both Dublin goals either side of half-time and earning the Man of the Match award.

Dublin were famously stunned by Jim McGuinness's Donegal in the 2014 All-Ireland semi-final but that defeat was to prove a watershed for Gavin's team and over the subsequent years they ensured that they wouldn't be caught again.

Brogan won his third All-Ireland medal in 2015, scoring two points in a low-scoring decider against Kerry played in appalling conditions.

It was the last All-Ireland medal that he would win alongside his older brother Alan, who scored a point off the bench in the closing minutes.

This was the first step along the road to the famous drive for five though Brogan's own prominence would diminish as this run progressed. He featured heavily in the 2016 season but was surprisingly dropped for the All-Ireland final replay against Mayo.

He was introduced early in the second half and clipped over a point as the Dubs again edged Mayo by the minimum on a score of 1-15 to 1-14.

Brogan had his fourth All-Ireland medal but would never again start an All-Ireland final, becoming a squad player rather than an automatic starter.

Dublin secured the three-in-a-row in 2017 with yet another one-point-win over Mayo in a final widely regarded as the greatest of modern times. Brogan was introduced late in the game and was a key calming presence as the Dubs went about maintaining possession and seeing out the victory in the lengthy injury-time period.

The obituaries were written for Brogan's career as he suffered an anterior cruciate injury early in 2018. By now almost 34, he underwent surgery and returned in time to play a part in the 2018 championship, albeit only appearing in Dublin's dead rubber Super 8s victory over Roscommon in August.

His involvement was similarly minimal from a playing perspective in 2019 as Dublin pushed for an unprecedented fifth All-Ireland senior title in a row.

But there was some surprise when he was omitted entirely from the match-day squad for the 2019 final against Kerry on the first weekend of September.

He did, however, return to the match-day 26 for the replay in which Dublin saw off Kerry by six-points, completing the legendary five-in-a-row.

He also won five National League medals, the first picked up in 2013. He amassed a tally of 21-197 in championship football.

In 2015, he captained Ireland as they triumphed in the International Rules Series.

Here is his full retirement statement which he released on Twitter this afternoon.

Onto the next journey!💙 pic.twitter.com/y2yb9u7Ov6