Former back-to-back All-Ireland club hurling champions Cuala are back on top in the capital, claiming their fourth Dublin SHC title in five seasons with a lion heart display.

Willie Maher's south-side outfit were tipped for a big win against a Brigid's side chasing a maiden success but had to dig so deep for their seventh county crown.

Football star Con O'Callaghan put Cuala on the road with an early goal at Parnell Park but injured himself in the process and they played the remainder of the game without him.

Free-taker David Treacy provided the bulk of their scores with a dozen points, all from frees, as the 2017 and 2018 All-Ireland winners reasserted their authority in the capital.

There were huge performances from Kerry man Darragh O'Connell and Dublin defender Sean Moran too, while the fit again Mark Schutte provided some important interventions.

Cuala will return to action in a fortnight against the Carlow representatives in the Leinster club championship with bookmakers already installing them as provincial favourites.

It was tough on Brigid's who were level with just over 20 minutes to go and battled all the way. 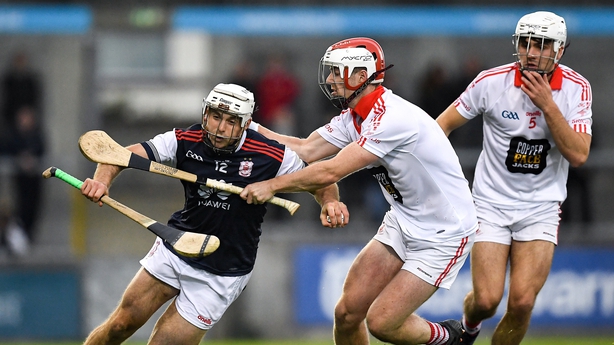 They ultimately rued the loss of full-forward Kevin Callaghan to a 54th minute straight red card with Cuala outscoring them by 0-04 to 0-01 in the closing minutes.

With returns of 0-05 and 2-03, all from play, from his previous two starts for Cuala, O'Callaghan was Cuala's dangerman and duly delivered again within minutes of the throw in.

Brigid's defender Donnacha Ryan was detailed to man mark the Footballer of the Year nominee, though was left in his slipstream as O'Callaghan raced cleared for a terrific fourth minute goal.

The attacker turned his man and strode clear down the left before firing across the goalkeeper for the opening score of the game.

But O'Callaghan suffered an apparent thigh injury when colliding with the leg of goalkeeper Alan Nolan and received treatment for several minutes before being substituted.

Cuala had the opportunity to double their advantage when Schutte was clear in the seventh minute but county goalkeeper Nolan made a great stop for Brigid's.

The save, allied to O'Callaghan's exit, appeared to energise Brigid's who improved as the half wore on and slowly but surely reeled in Cuala to finally draw level just before the break at 1-04 to 0-07.

It was far from the plain sailing predicted by bookmakers for Cuala with the Dalkey outfit registering just one point from play in the half following O'Callaghan's goal.

Brigid's were more than happy to scrap for it and four of their seven first-half points also came from frees, courtesy of Winters.

The sides were level twice more in the third quarter before Cuala surged six points clear, 1-13 to 0-10, with a surge of point scoring.

But Brigid's refused to relent and Keith Mullally's 49th minute goal, after following up on Cian O'Sullivan's initial blocked shot, hauled them right back.

A point from Johnny McGuirk, son of the manager, left just one in it in the 57th minute but four Cuala points from there on in, including two from Treacy, eased them home.