Newtown Blues made it three-in-a-row of Louth senior championships in emphatic fashion over a spirited Naomh Mairtin.

The showpiece was called off at the last minute last weekend, but it was worth the wait for the Drogheda based side who burst into the game with a whirlwind 2-5 to no score start.

Shell-shocked to say the least, Naomh Mairtin were completely at sea as the Blues controlled the tempo and oozed confidence throughout the opening half. A Ross Nally point and an Andy McDonnell free brought an air of inevitability around Drogheda.

The Mairtins finally forged a way into the game with their first score in the 18th minute as Eoghan Callaghan strode up the field to rouse his troops. Wayne Campbell and county star Sam Mulroy added another two scores to make it 2-5 to 0-3 at half-time.

Naomh Mairtin forced the pressure in the early part of the second half with Conor Whelan landing their fourth point in-a-row. However, Blues wing forward Rob Carr settled his side with his second point, his sides first score in 22 minutes.

Yet the Mairtin’s would not relent, John Clutterbuck was driving force in their revival. The county wingback drove up the field for the Monasterboice outfit as they scored three of the next four points. Clutterbuck himself pointing to make it a six point game 2-6 to 0-6.

Down the stretch composure was needed and it was the champions elect that showed it. Keeping the scoreboard ticking was vital for their nerves while the underdogs needed to take every chance, but they didn’t.

Naomh Mairtin came to rue that disastrous start as the game was amazingly still there for them in last moments. Sam Mulroy found the side netting after he punched the ball seconds earlier to make it a one-score game.

However, the champions hung on to match Cooley Kickhams' 1976 to 1978 trio of titles and men from Newfoundwell now have the chance next season to match their own club and county's record of four Joe Wards in-a-row. 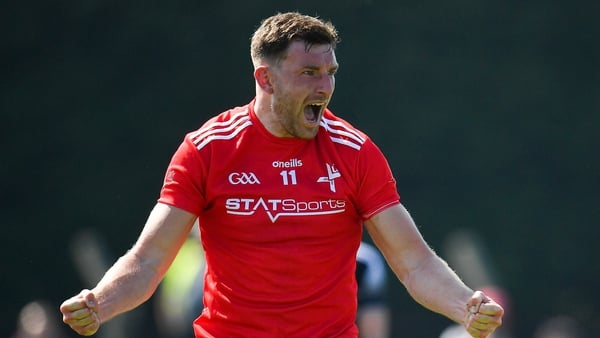