Crossmaglen Rangers blew a brilliant Ballymacnab out of the water with a rally of nine points in as many minutes to clinch their 45th Armagh Senior Club Championship title.

The Nab had put in a stunning opening half performance and when Jack Grugan punched in his goal on 36 minutes, adding a further point to give his side a four point lead, they looked poised to lift their first ever senior crown.

But Crossmaglen rallied with courage and conviction and Ballymacnab could not live with them.

Three Oisin O’Neill converted frees, a point from Paul Hughes and another from midfielder Alan Farrelly had the sides level on 44 minutes and the champions owned the last quarter.

Stephen Morris, Callum Cumiskey and Mel Boyce all got on the scoresheet and Colin O’Connor’s goal on 56 minutes put any ideas of a late comeback out of the question.

Oisin O’Neill’s injury-time goal only gave a fair reflection of their dominance. It was an awesome second half performance.

O’Neill opened the scoring with a wonder point from 48-metres but the signs were ominous for Cross when full-back Rico Kelly fouled Jack Grugan and the same man converted the resultant free.

Armagh captain Rory Grugan created an angle for himself to score and give Ballymacnab the lead but a Cian McConville converted free had the sides’ level with seven minutes played. 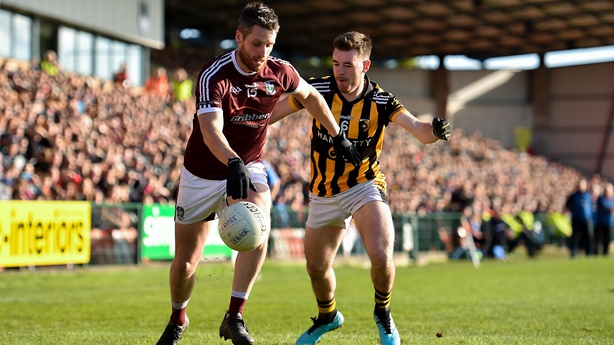 McParland fired his 45’ wide before Colin O’Connor edged Cross ahead and another fantastic score from Oisin O’Neill stretched Rangers’ lead.

Paul Meegan pulled a score back for the Nab before Gavin McParland’s stunning goal on 15 minutes.

It was a score of absolute beauty as Jack Grugan picked out a pin-point 30-metre cross-field ball to McParland and his safe hands collected the pass and the 2009 All-Ireland Minor winner made no mistake from close-range.

Jack Grugan and Player of the Match Rian O’Neill traded frees but Rory Grugan’s clever point after a quick free by his brother put a goal between the teams.

Jack Grugan’s third point and his first from play put four points between the teams but Cian McConville had the last say of the half as the Nab led 1-06 to 0-06. And then came that stunning second half surge from Crossmaglen.

Cross will be hard to stop in Ulster. Of course, the person plotting to do just that will be Clontibret boss John McEntee, a Crossmaglen All-Ireland winning captain.