Donegal will begin their Ulster SFC title defence with a quarter-final showdown against Tyrone next summer.

Declan Bonner's men had too much for Cavan in last June's decider, powering to a 1-24 to 2-16 win in Clones.

That was Cavan's first appearance in a provincial decider in 18 years and they'll have to get through a preliminary round collision with Monaghan before a possible last-eight meeting against Antrim.

Derry face Armagh and Fermanagh take on Down in the other two quarters.

The draw was made live on RTÉ Radio's 1's Morning Ireland programme.

"The most fascinating game last summer was probably Donegal-Tyrone up in Breffni Park (in the Ulster semi-final). Tyrone yet again are going to to have to head up to Ballybofey. We haven't had a great record up there.

"There's no getting away from the fact it's a most difficult tie. But that's what you get with the Ulster championship."

The winners will face either Derry or Armagh in the semi-finals, with Cavanagh adding: "Armagh are probably another team that are making real strides. There's a sense there that there's a team building that can challenge for an Ulster title.

"To be drawn on the same side as Donegal and Tyrone I'm sure disappoints them but they'll be hoping to build a team to challenge." 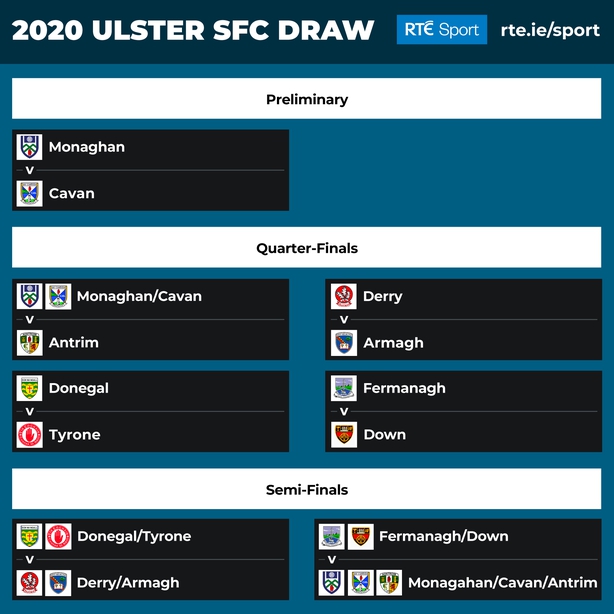