All-Ireland champions Dublin will begin their attempt to win an unprecedented tenth Leinster football title in a row against Westmeath next summer.

The draw was made this morning on RTÉ Radio 1's Morning Ireland, with Jim Gavin's side set to face the team they met in the 2015 and 2016 deciders at the quarter-final stage. 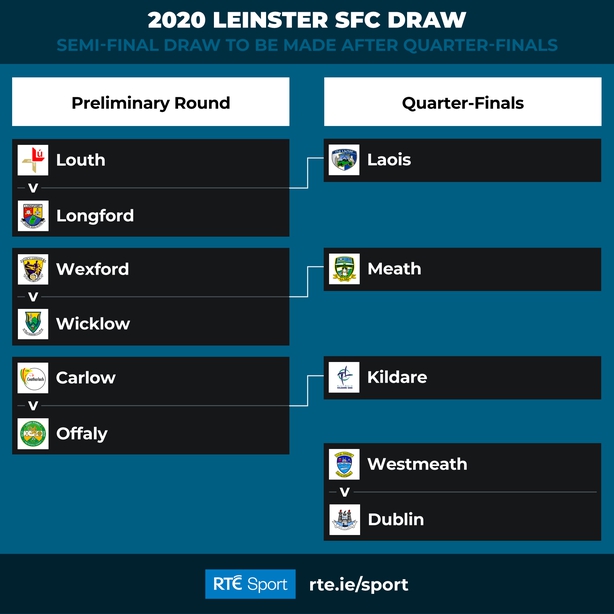 Elsewhere, Paul Galvin's first Championship game in charge of Wexford will see the Yellowbellies pitted against neighbours Wicklow in the first round. The winner of that clash will be up against this year's beaten finalists Meath in the last eight.

Jack O'Connor's Kildare await the winners of Carlow and Offaly, while Longford and Louth will battle for the right to take on Laois in the quarters.

Last year's provincial semi-finalists Dublin, Kildare, Laois and Meath were all guaranteed direct passage into the quarter-finals while Westmeath were drawn out of the hat

RTÉ GAA analyst Colm O'Rourke believes the Lilywhites and his native county Meath can eventually challenge the Sky Blues, but that it won't happen in 2020.

"I think Kildare and Meath have the resources to take on Dublin," said the five-time Leinster winner.

"Meath, in particular, have been left behind a bit, but we're improving... hopefully improving rapidly. I think the experience of this year getting to the Super 8s, and the extra experience of the Division 1 league campaign next year is going to be brilliant for the Meath lads.

"Kildare are under a new manager, Jack O'Connor. He has won All-Irelands with Kerry: minor, senior, and under-21. He's a brilliant fella to have in charge there.

"I think it's exciting to see Paul Galvin take his first step into inter-county management. I think he really loves the idea of coaching, and I would expect to see rapid improvement from Wexford.

"They're fairly evenly balanced, and if you took Dublin out of the equation, it would look like a very competitive Leinster Championship. The rest could beat each other on any given Sunday."

The draws for the Munster (7.30am) and Connacht (8.30am) championships take place tomorrow morning, while it's Ulster turn on Wednesday.

The winner will play Laois in a quarter-final

The winner is set to play Meath in a quarter-final

The winner will play Kildare in a quarter-final