Forty years after making his debut for the adult Na Rossa team, Donegal manager Declan Bonner was still in the cut and thrust of championship action when he lined up in goals for his club at the weekend.

The small junior outfit, which by Bonner's reckoning has only between 15 and 20 active members at present, defeated Carndonagh to advance to the quarter-finals of the junior championship, but the most noteworthy aspect was the presence of the Donegal boss between the sticks.

Leitir Mhic an Bhaird is where Na Rossa calls home, situated between the larger towns of Glenties and Dungloe, but like many rural clubs, emigration has had a significant impact.

Bonner was a 17-year-old on the team that won the 1982 junior championship, while the club landed intermediate county titles in 1989 and 1999. Na Rossa flirted with the senior ranks, but the last decade has been one of toil, with many players departing the area for work abroad.

Five years ago Na Rossa fielded two adult sides, but are now struggling to keep one going, highlighted by the fact Bonner togged out last weekend, 40 years after his first taste of championship action for the club as a raw 14-year-old.

The club itself was only formed the previous year.

The 1992 All-Ireland winner is now in his second spell as manager of his county, but is also chairman of the club and explained on the RTÉ GAA podcast how it came to pass that he started in goals last weekend as Na Rossa defeated Carndonagh by the bare minimum, 1-09 to 1-08 in Foden.

At 54 years of age, the best thing is to stay on the line and concentrate on getting my kickouts away

"We had 16 players at the weekend and the previous week we were down to 15," he said.

"The goalkeeper who is normally there [Ryan McGonagle] flew out to New York last week. We were down to the bare bones and that's why I had to get the boots back on again.

"I had no intention over the last number of years of going back playing, but circumstances told me otherwise. At 54 years of age, the best thing is to stay on the line and concentrate on getting my kickouts away." 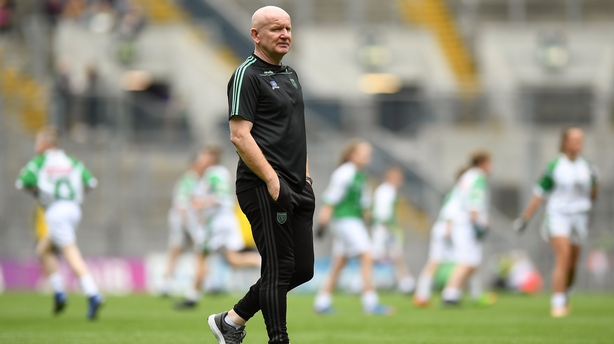 Bonner, who has led Donegal to the Super 8s for the past two seasons, outlines the size of the club.

"In the last couple of years we have found it hard to keep hold of numbers. We would have a team or two teams abroad between Australia, Canada, the UK, America. It has just become more difficult," he said.

"Numbers are very, very small. It’s a matter of trying to keep the club going and it’s not getting any easier. It’s a very small club.

"Five years ago we had two adult teams, but we are struggling now to get one team out. At underage level, we have amalgamated with our neighbours Dungloe.

"It’s a matter of keeping the club afloat and that’s what we are trying to do."

Bonner told listeners that when the demanding inter-county season comes to a conclusion, he runs "three or four" mornings a week to keep himself in shape.

Is there a temptation to join in with the likes of Michael Murphy, Ryan McHugh and Paddy McBrearty during Donegal’s training sessions?

"I would stay well out of the way of inter-county contact. I don’t think I’d last too long in there. There’s too much happening to be involved."