The Dublin ladies capped a remarkable weekend for GAA in the county by securing their third successive All-Ireland senior football title on a day when scores were at a premium.

Less than 24 hours after the men secured a historic five-in-a-row, Mick Bohan's side made their own history in front of a record attendance of 56,114 at Croke Park, despite landing just one score in the opening 30 minutes against a dogged Galway outfit.

"We won the war," the victorious manager admitted afterwards and, having started the decade without a single title, they conclude it with a fourth Brendan Martin Cup, though the Dubs were made to work hard on a day when defences dominated.

The Tribeswomen were battle-hardened from their one-point win over neighbours Mayo in the semi-final and began on the front foot, with the majority of the early exchanges taking place on the Dublin 45m line.

Underfoot conditions made life difficult for both sides and while Galway were patient and controlled in possession, there was little change from the compact Dublin defence.

Captain Tracey Leonard and her cousin Roisin coughed up three opportunities to open the scoring in the opening five minutes and that set the pattern of play as Dublin struggled to get their vaunted forward line into play.

Niamh McEvoy was a dominant figure at centre-forward and her quick thinking from a free ended with the St Sylvester's player hitting the upright from close range.

At the other end, Tracey Leonard was also thwarted by the uprights, while in between Carla Rowe, who picked off three points in the semi-final, snatched at her chance as the groans from the crowd grew louder.

There were many spills and in truth, few thrills, but it made for intriguing viewing. Inspirational centre-back Sinead Goldrick ended any chance of a scoreless first half and did so in style.

With 22 minutes on the clock, the Cabinteely Foxrock player surged upfield and took a pass from clubmate Hannah O'Neill, a late change to the Dublin team in place of Noelle Healy. Goldrick rose highest alongside three Galway players and rifled the ball past goalkeeper Lisa Murphy via a deflection off defender Sarah Lynch.

Three minute later, Galway finally got some joy for all their possession when full-forward Sarah Conneally swung over with her right after excellent work on the ground by Kilkerrin Clonberne's Olivia Divilly, who pounced to gather the breaking ball before finding her team-mate.

Two scores in an All-Ireland final half was somewhat surreal, and though the shooting was sub-standard, the effort couldn't be called into question, with the respective medical teams making a number of forays onto the pitch following some heavy collisions.

Despite their profligacy in front, Galway could be relatively pleased to have kept the star-studded Dublin forward line scoreless and entered the break two points in arrears, 1-00 to 0-01. 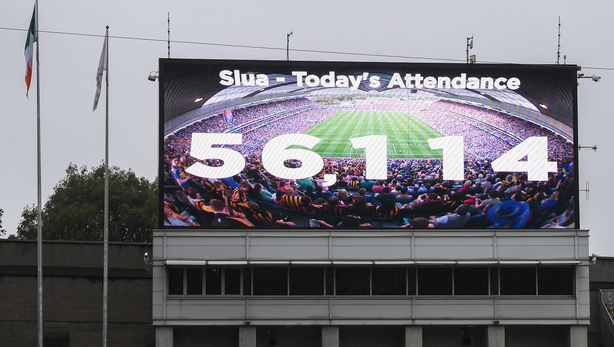 The crowd had witnessed just one point in the opening 30 minutes but the champions required just 15 seconds upon the resumption for their first white flag of the day after direct running from Lyndsey Davey.

Whatever was said by the Dublin management team to their forwards at half-time seemed to have the desired impact as they put huge pressure on the Galway defence. Luckily for them however both McEvoy and captain Sinead Aherne failed to capitalise from frees.

Tim Rabbitt's side were dealt a blow when Mairead Seoighe was yellow carded for a late hit on Dublin goalkeeper Ciara Trant in the 37th minute, and the Clonbur woman did not return to action, being replaced by Leanne Cooney when her 10 minutes were up.

Worse was to follow for the 14 players two minutes later.

On a tricky day for free-takers, Aherne decided to play a quick ball to the increasingly influential Davey.

The Skerries Harps wing-forward slipped inside Shauna Molloy and skipped past another defender before hand-passing the ball across the goal where O'Neill was lurking to palm the ball to the back of the net.

The Galway heads however simply refused to drop. Tracey Leonard knocked over two frees to reduce the gap to four points, but again they were guilty of failing to convert their chances.

Roisin Leonard, aided by the crossbar, made it a one-score game in the 54th minute but Aherne responded within 60 seconds to keep Galway at an arm's distance.

The game was effectively sealed a minute later by substitute Noelle Healy. The 2016 Footballer of the Year was left out of the starting team but showed her worth with an electric run and composed finish.

A decorated Dublin team being held to just five scores was a feat for Galway, but the underdogs faded somewhat as Dublin's key players dug deep.

It was the lowest scoring final in 16 years but that will matter little to the victors as the Dublin juggernaut rolls on.