By her own admission, Galway captain Tracey Leonard isn't the most vocal of captains.

The gifted forward is one of the key players in attack for the Tribeswomen as they go in search of just a second All-Ireland ladies football title on Sunday, but she hasn't been selected as skipper for a number of years for her ability to rouse team-mates verbally.

"The girls would know I'm not a big speaker or a motivational speaker before games, so it's great to have others in the changing room who talk when they need to talk," she tells RTÉ Sport.

"There are a lot of captains in that group and it's only a small part to play [being captain]," she says modestly.

Leonard undoubtedly saves her best work for the pitch.

The gripping semi-final win over Mayo was her first time on the hallowed Croke Park turf - "it's an overwhelming stadium to play in, but at the end of the day, it is just a pitch" and her second will be the small matter of halting Dublin's three-in-a-row bid.

Leonard's sparkling performance in the Connacht final replay over Mayo was one of her finest in maroon. Stationed at centre-forward, she plundered a goal in either half and finished with the same tally (2-03) as the entire Mayo team (0-09).

The manner of the victory over their neighbours last time out was especially pleasing for Leonard. The Corofin player admits that the temperament in the past had let previous Galway teams down, often "fizzling" out when games were there to be won in the closing stages.

"I think the semi-final proved we are no longer the nearly team. The character of our girls got us over the line." 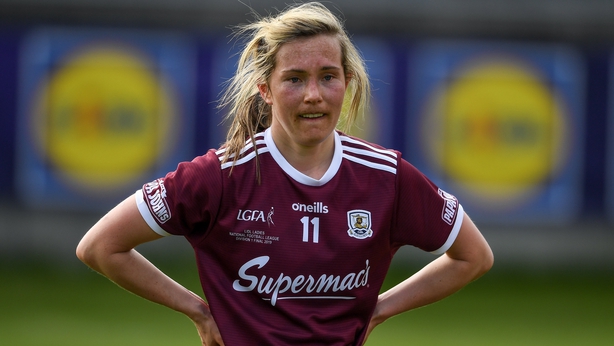 Facing them is a Dublin side that has swept all before them, including sticking six goals past Galway in last year's semi-final.

How they can down the reigning champions is the "million dollar question" she says, but work-rate and performance are non-negotiable.

"We draw great inspiration from what they did at the weekend. It's a huge thing for Galway ladies the way they came in as underdogs and really drove it home.

"They have been knocking in the door and the tag of nearly team has been thrown at them too. I was delighted for them when you know the commitment that goes into it."

Whatever way it pans out on Sunday, Leonard is grateful simply to be back on the pitch doing what she does best.

In 2016 she suffered a cruciate injury that kept her out for 11 gruelling months and Leonard, a nurse at Galway University Hospital, but says the experience has ultimately stood her in good stead ahead of the biggest day of her football career.

"It's only until an injury hits you that you realise how lucky you are to play in a team, surrounded by such great team-mates. At the time, these injuries can be quite tough to take, but in the long run, they do stand to you and improve you as a player.

"When you have to dig deep, you remember back to the days when I was injured. It's great to be out there actually playing."