Perched high in the upper tier of Croke Park's Davin Stand, Enda Stenson couldn't believe what he was seeing in the dying moments of the All-Ireland football final.

Most eyes in the stadium were drawn to Dublin's Dean Rock and his bid to seal a dramatic win with a free from under the Cusack Stand, but Stenson was more preoccupied with Tommy Walsh gripping hold of his Kerry team-mate David Moran on the endline.

The two tallest players in green-and-gold and life-long friends were readying themselves for a left-field approach to defending the scoreboard, with 6ft 4in Moran primed to take to the skies should the ball land in his vicinity.

The aerial antics were ultimately not required and after the pictures spread around social media like wildfire, many credited Kerry for their quick-thinking, while others wondered if it had ever been done before. 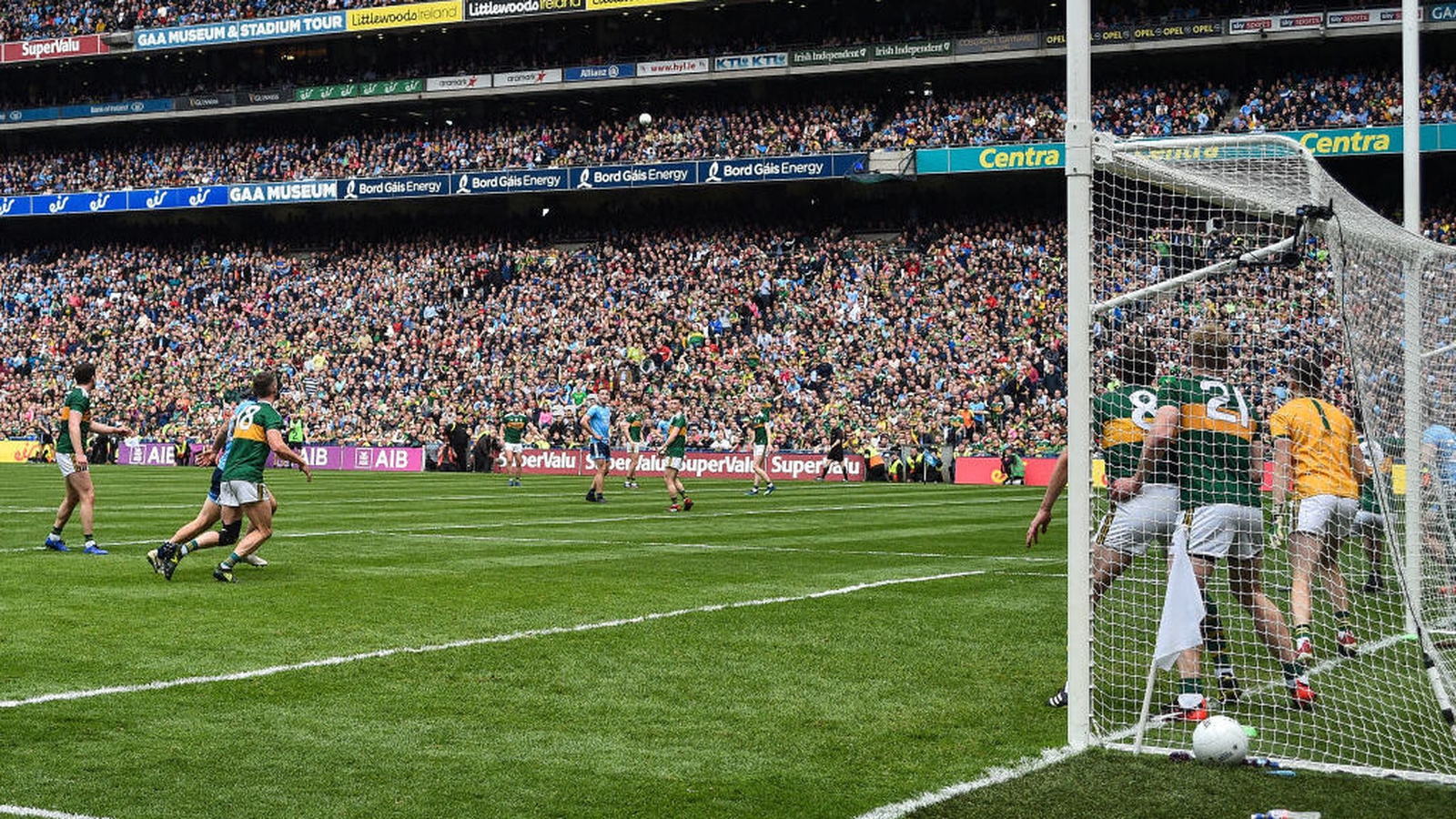 As Stenson watched on – "I didn't want Rock to miss, but I was hoping to see if Kerry could execute the move" – he thought back to a sunny September day 25 years previous.

He was the referee in charge as Aughawillan defeated Allen Gaels in a highly controversial Leitrim county final, where the final act of the game saw the victors pull off the "lineout" move that Kerry threatened to secure a historic three in a row by the bare minimum.

A quarter of a century later those involved from both sides and the match official himself still talk about a move rarely seen on a Gaelic field.

Pete McGrath's Down finished out 1994 with Sam Maguire in their possession, but the year arguably belonged to Leitrim. The emotional outpouring as a first provincial title since 1927 was secured captured the public imagination, and a valiant battle was fought against Dublin in the semi-final at Croke Park.

The dust had barely settled on that incredible feat before club matters took centre stage, with the championship run off in five weeks. Aughawillan, led by senior stars Declan D'Arcy and Mickey Quinn, were fancied to make it three titles on the trot against a Gaels side looking to back up their maiden county success three years previous. 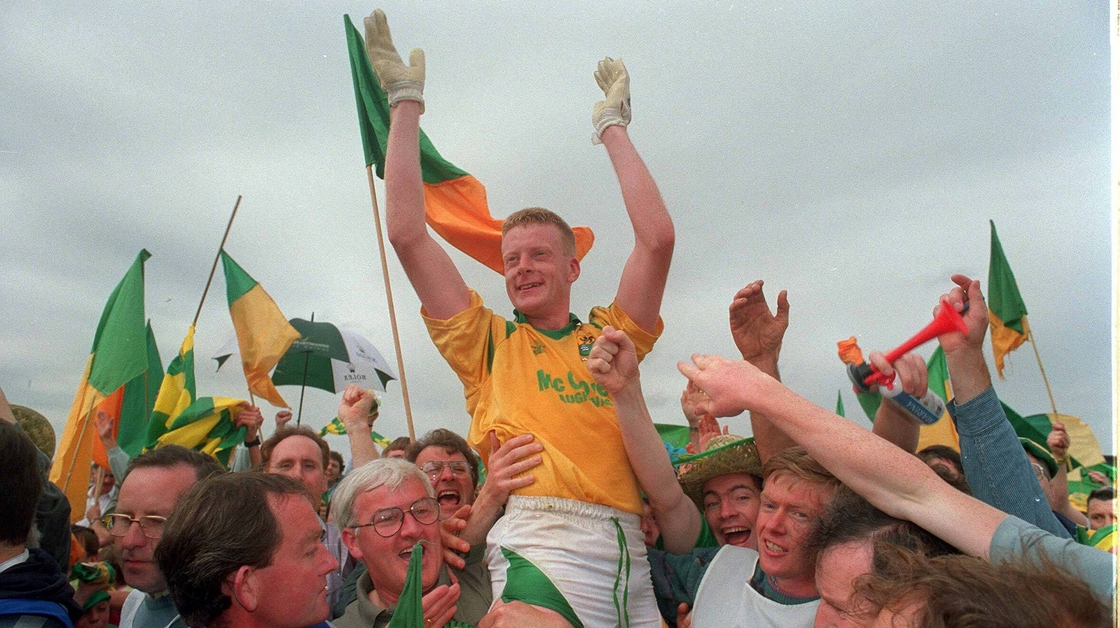 The underdogs however controlled large portions of the match and were full value for their two-point lead with 60 minutes up on the clock. The drama however was only beginning with the clock in the red.

First Aughawillan were awarded a hotly-contested penalty that Peter Prior dispatched to swing the momentum back in their favour. Their fans were still celebrating when Gaels had the chance to draw level with a close range free.

Martin McGowan was flawless with his four placed balls that afternoon, but this was to the right of the posts. As a right-footer, he left responsibility to talisman Padraig Kenny to convert, but the Leitrim player's radar was uncharacteristically off.

Both sets of fans could barely draw breath. Two minutes into injury-time and Prior's kick-out was turned over about 40 yards from his goals. This time it was over to the left and perfectly inviting for McGowan to snatch a draw.

The forward was playing through the pain barrier – cortisone injections were part of the pre-match ritual in 1994 and it later transpired his spine was dislocated – but from placed balls he was nonchalantly knocking them over.

One more kick and he would take the game to a replay.

I jump, you push

As accurate as McGowan had been, Prior had been getting his fingertips close to the previous efforts, the ball whistling past the black on a couple of occasions before he got a moment of inspiration.

"I would have always been swinging off crossbars and waving at balls coming across," he says.

Thomas Quinn had been retreating from the forwards to the goalline as McGowan kept the umpires busy and Prior informed him that if the chance arose, to "give him a lift" if the ball came over the middle of the bar. 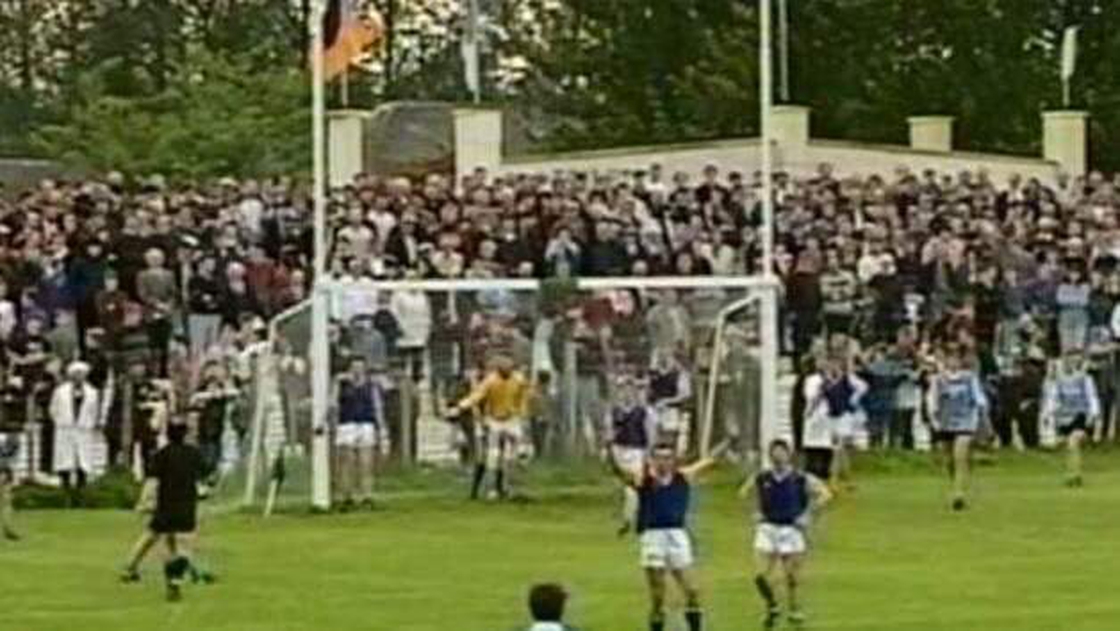 Martin Flanagan takes up position behind Martin Prior

There was just one problem for the final free; Quinn was nowhere to be seen. Full-back Flanagan was ushered over and the simple instruction left no room for confusion.

"I jump, you push," Prior bellowed.

Out the field, McGowan's concern centered on balancing power with accuracy. He struck it true and was convinced he had secured the final score of the gripping contest.

"It was certainly two yards over," the forward insists.

Back in the square, it was quickly evident to the scheming Aughawillan pair that the trajectory of the ball was in their favour. This was the moment.

"I gave him a bit of a hoosh," recalls Flanagan who stood behind his team-mate, "and told him to get the ball into his chest as quickly as possible as I couldn't hold him any longer."

"It was a good lift," concedes Prior, whose shoulders were almost level with the crossbar when he fetched the ball over his head."

While the lift was to perfection, the return to earth wasn't quite as graceful.

"Martin [Flanagan] just let go," says Prior, "and it was a long way down."

The netminder held on to the ball for dear life and engineered a "handy" free. Within 60 seconds Stenson blew the full-time whistle, "hounded" by unhappy Allen Gael players as he left the pitch, but satisfied in his mind he did nothing wrong. 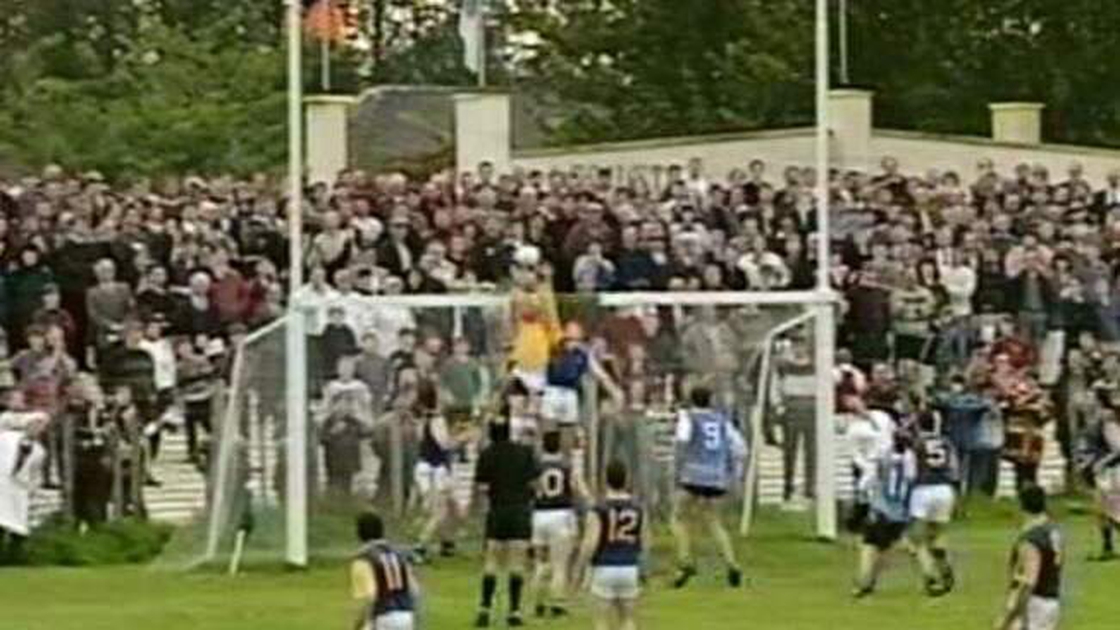 Prior plucks the ball out of the sky

In the Leitrim Observer's scorecard of the contest, it notes mischievously that "somehow" Prior plucked the ball over the bar, though in his match report, reporter John Connolly is much more assertive.

"When Martin Prior soared into the air, whether under his own steam or with a few helping hands to snatch Martin McGowan's free from over the bar, Allen Gaels must have known it was not their day," he wrote.

In an interview with the local newspaper post-match, Prior was happy to give little lip-service to the match-winning stunt.

"The lads have been telling me it was over the bar, but I just don't know. I just saw it coming and I went up. And kept going." 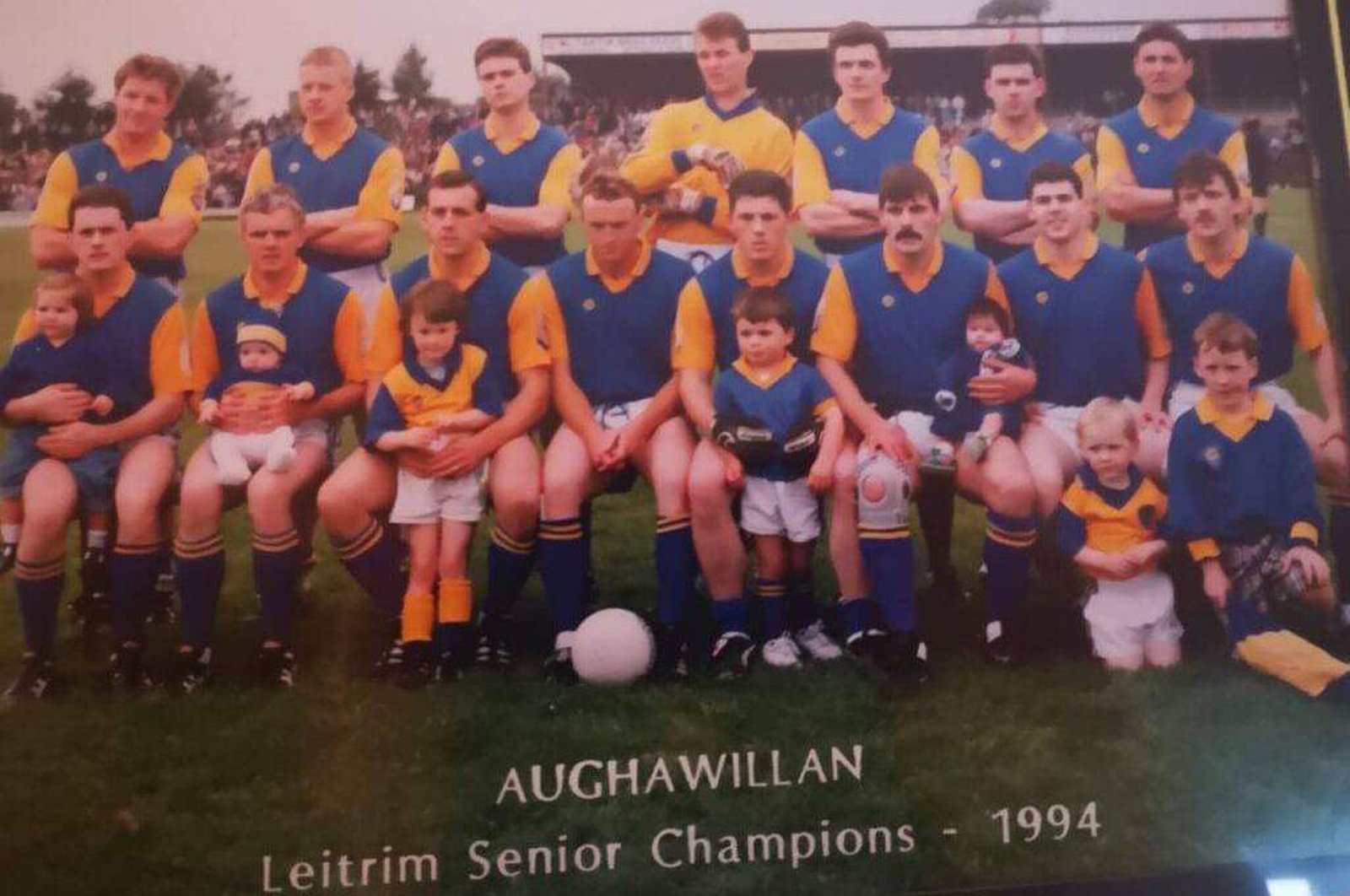 Martin Flanagan is in the backrow, far left, alongside Declan D'Arcy, with Martin Prior centre stage

Confusion wasn't just confined to the supporters and opponents either, as some members of the winning team seemed to miss the aerial heroics.That situation was soon rectified in Ballymore, where the tradition of the time was to watch a tape of the game in Prior's pub.

Men, women and children huddled around the TV where the action was replayed again and again. "It was hilarious," Prior recalls, "as some of the lads didn't even realise what we pulled off."

Jesus Christ, you could kill a fella if you didn't get it [the lift] right...You don't know anything like those Aughawillan lads

The final was on the tip of everyone's tongue in the subsequent days and weeks, while players from both sides were back in close proximity for Leitrim's end of season trip to New York.

Manager John O'Mahony, who led the county to one of the most glorious days in its history, recalls the county final being brought up on a number of occasions in the Big Apple.

"The club cup travelled with us as well as the Connacht cup." 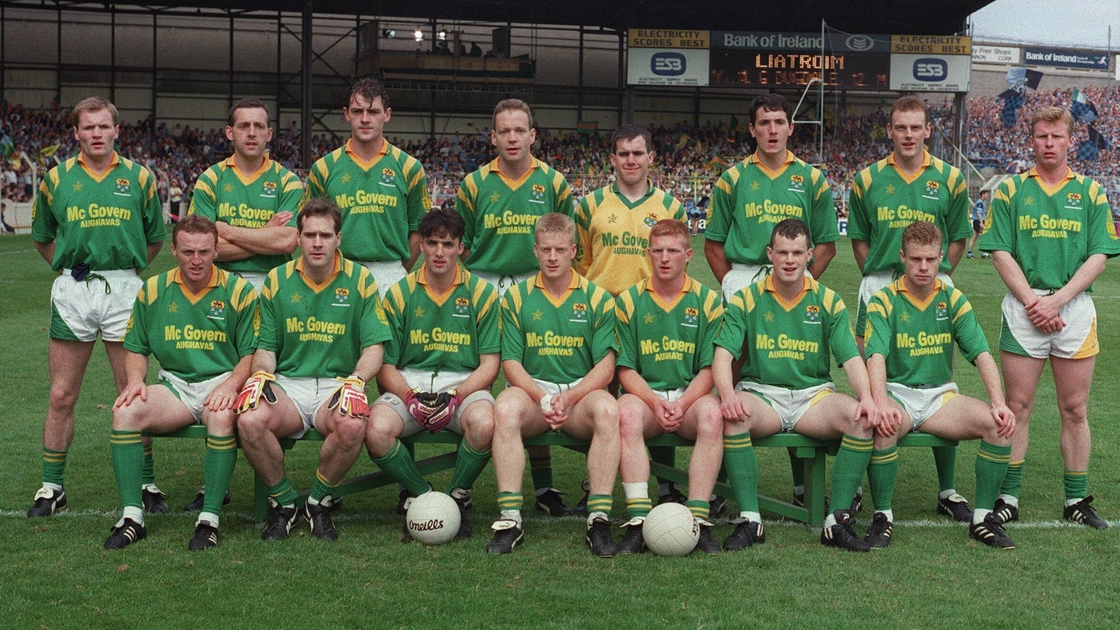 On All-Ireland final morning, Martin Flanagan bumped into Stenson with his son-in-law on Clonliffe Road. Naturally the full-back relived the story with the usual gusto and the retired referee laughed along like he has done so for 25 years.

A few hours later and Stenson was watching in disbelief at the prospect of history repeating itself as Moran and Walsh hatched their plan on the biggest day on the football calendar.

Former inter-county referee Brian Gavin says that while there is nothing against the ploy in the rulebook, if it ever is executed in a high-profile game, then we are likely to see it brought up for discussion in Congress.

Prior, who has been based in Dublin since 1989, works with D'Arcy in the building trade and says there has been plenty of jokes and messages flying since the weekend.

Stenson and McGowan can both look back on the episode with smile.

"I never enjoyed anything as much as refereeing," the Independent Carrick-on-Shannon Councillor says. "People take the abuse too seriously, you just laugh it off and move on."

The free-taker too said if nothing else, a hard lesson was learned that day. The following year he found himself in a similar position, with a free at the end of the game to secure All-Ireland honours in a garda inter-divisional final.

Will the feat ever be pulled off at inter-county level?

"It's surprising in a way that it doesn't happen a bit more," notes John O'Mahony.

"It might be the next great invention after the blanket defence.

"If Kerry had pulled it off, it would have been some twist of fate for Declan D'Arcy on the Dublin sideline." 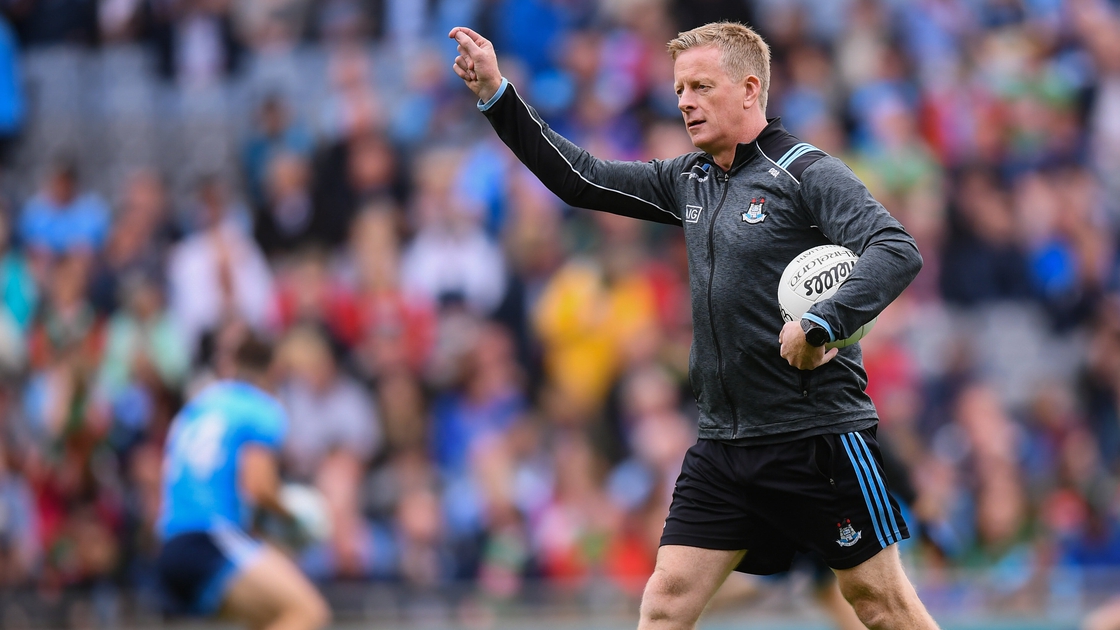 Stenson refereed three Connacht county finals in his 33 years as a referee, but never saw anything like it before or since.

"Jesus Christ, you could kill a fella if you didn't get it right. You don't know anything like those Aughawillan lads. That's tough country down there."

Allen Gaels would exact revenge – they defeated Aughawillan in the next two county semi-finals on their way to successive titles and Declan D'Arcy's final club game in Leitrim ended in a defeat to Gaels in a league final.

Aughawillan would go 20 years without claiming another county title, but the conversations over the course of the last quarter of a century often lead back to the same place.

McGowan has family connections in Aughawillan and has poured over the 1994 defeat at many a wedding with members of the opposition.

At the most recent, he told penalty hero Peter Prior that he still laments the only free he missed all day.