Kerry great Tomás Ó Sé believes that his old Mayo rival Andy Moran is perfectly suited to a career in GAA management after he announced his retirement from inter-county football.

The 2017 Footballer of the Year confirmed that his decision to call time on his Mayo career on Monday, bringing a 15-year spell to the close.

Moran and Ó Sé faced off on a number of occasions down the years and although the Kerry man came out on top in the two All-Ireland finals in which they met, he hailed Moran as one of the true greats to play the game.

Speaking on Morning Ireland, he said: "An outstanding footballer and what a career. I suppose he's the first of this great Mayo team to walk away and he’s leaving a real legacy of what it is to be the pure professional in an amateur world.

"He’s a great player and a great servant for Mayo."

Ó Sé pinpointed Moran’s adaptability and his hunger to constantly improve as the main drive behind his longevity as an inter-county player.

While the Kerry man admits that the lack of an All-Ireland winner's medal may grate with Moran, he insists that it shouldn’t detract from an outstanding career.

"Mayo have been so close and yet so far and for him personally I suppose it’s a very, very hard decision for him to walk away when he was so close to the game and they gave it another rattle this year.

"There was a kind of a time in his career in 2015 when [Pat] Holmes and [Noel] Connelly were in charge of Mayo and he was used as an impact sub’. 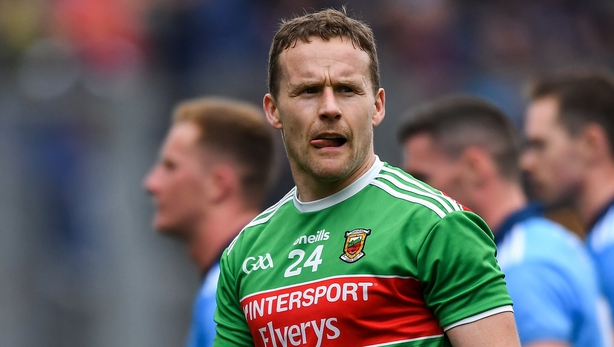 "After that he got a new lease of life under [Stephen] Rochford and he changed and he was brilliant. His movement, his ball-winning ability, his scoring, his intelligence, his honesty, his aggression, it was outstanding.

"To win player of the year at 33 years of age, was down to the fact that he changed his whole lifestyle. He changed jobs, he went into a career that suited him – I think he went into a gym business.

"He had a connection with the fans that’s rare, he was outstanding."

Thoughts will now turn to the next chapter for Moran and Ó Sé believes that he has all the makings of a top-class manager.

"The leadership that he showed on the field will lead people to say that he will have no problem in going down that road," he said.

"He’ll be a wanted man in Mayo and outside I would say in management and in getting involved in some role with Mayo because he seemed to be so popular with Mayo, with players and management.

"He got the very most out of himself which is rare."