Kerry forward Stephen O'Brien says that the county will appeal against his looming suspension for the All-Ireland final.

The Kenmare man, who scored the only goal of the game, was sent off towards the end of their three-point semi-final win over Tyrone at Croke Park for a cynical pull-down on Connor McAliskey.

That was his third black card of the season and, as such, rules him out of the decider against five-in-a-row chasing Dublin on 1 September.

Speaking to RTÉ Sport after the game, the man of the match admitted that he was aware that another black card would be problematic.

"I think the black card in the Meath game was very harsh. I was running off the ball and it was an accidental head clash so we’ll be certainly looking to appeal that one." 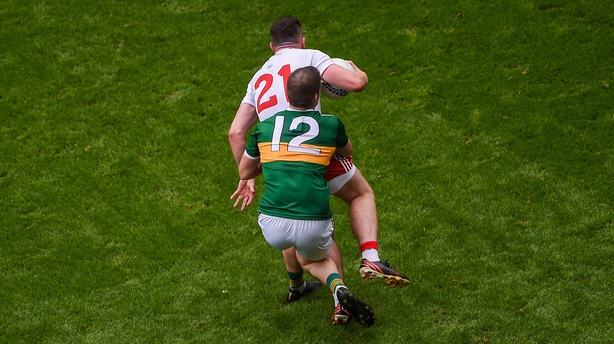 Kerry boss Peter Keane, who has led the team to a Sam Maguire showdown in his first year in charge, was similarly phlegmatic about the situation.

"If there’s a possibility of appealing it we will," Keane said.

"You want everyone than you can possibly have. Stephen is no different. He did well today.

"But with every panel, you’d be down training on Tuesday night and some fellow picks up a knock and some other fellow who isn’t with us today might be with us the next day.

"That’s why you develop a panel."

O'Brien received a black card in the League against Galway while on a yellow, so received a red card.